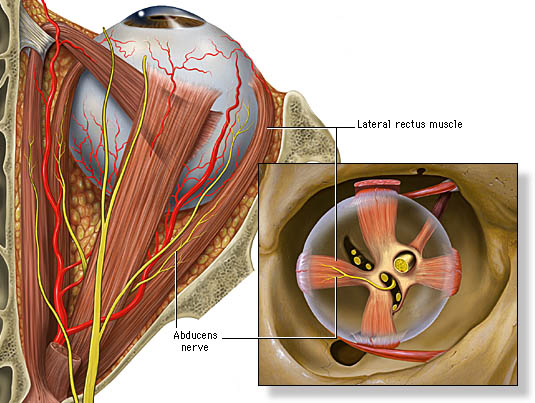 The abducens nerve is either of the sixth pair of cranial nerves, which supply one of the eye muscles. It has the longest intracranial course of any cranial nerve. The abducens nerve, or abducent nerve, is a motor nerve. It innervates the lateral rectus muscle (responsible for lateral gaze, i.e., moving the eyeball outwards) of the ipsilateral orbit.

The abducens nerve emerges from the anterior surface of the brain, in the groove between the lower border of the pons (part of the brainstem) and the medulla oblongata. It lies at first in the posterior cranial fossa. It then pierces the dura mater lateral to the dorum sellae and turns sharply forward, crossing the superior border of the petrous part of the temporal bone. Having entered the cavernous sinus, it runs forward below and lateral to the internal carotid artery. It enters the orbital cavity through the lower part of the superior orbital fissure, within the tendinous ring. Finally, the abducens nerve runs forward and supplies the lateral rectus muscle.

Due to its long path inside the skull, the abducens nerve is often damaged in fractures of the base of the skull, or by a disorder, such as a tumor, that distorts the brain. Such damage may give rise to double vision or a squint.

Dysfunction of the abducens nerve can occur at any point of its transit from the pons to the lateral rectus muscle, resulting in sixth nerve palsy. The sixth cranial nerve is the most commonly affected ocular motor nerve in adults. In children, it is the second most common, following the fourth cranial nerve, with an incidence of 2.5 cases per 100,000. Poorly controlled diabetes mellitus is a significant risk factor for an abducens nerve palsy.