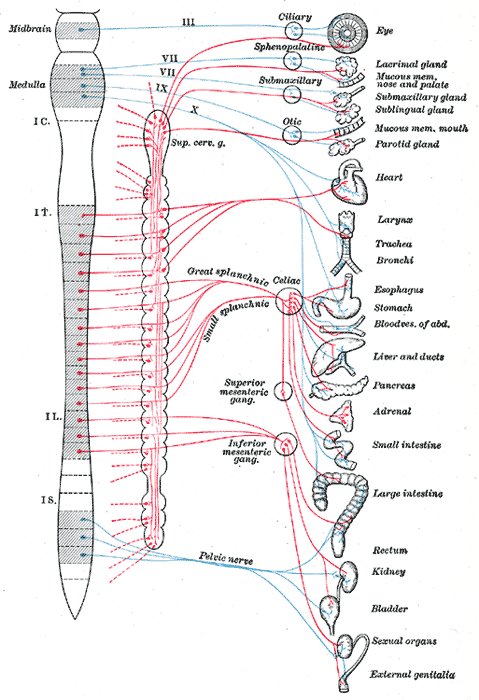 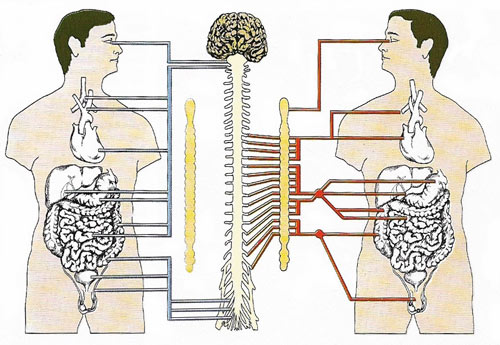 Fig 2. The sympathetic system prepares the body for fight or flight. It can limited the blood supply to the digestive organs, increasing the amount of blood available for muscles and limbs. The parasympathetic system conserves resources and relaxes the body after an emergency or for sleep. Sympathetic nerves (red lines) lead from the spinal cord to nearby nerve chains, the sympathetic chains of ganglia, The parasympathetic nerves (blue lines) lead directly to the organs. This system also controls the heartbeat. 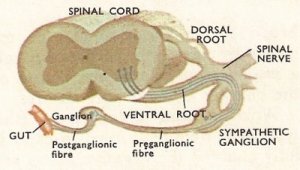 Fig 3. The path of sympathetic fibers out of the spinal cord.

The autonomic nervous system (ANS) is the part of the nervous system that supplies stimulation to the involuntary muscles, such as the smooth muscles and cardiac muscles, and to the glands. The ANS is controlled principally by parts of the brain stem and the hypothalamus.

The system of nerves spreading through the body is referred to as the peripheral nervous system. The outer or somatic part links up the sense organs, which provide the individual with a picture of the outside world, and with the effectors that enable movement. But in order that these sense organs and effectors function, the inner machinery of the body must be functioning smoothly and the rate at which it works must be adjustable so that the varying demands of the outer structures may be satisfied. When a person is moving, his or her muscles require a greater supply of oxygen than when at rest. The heart must beat faster to supply more blood and this blood must be supplied with sufficient nutrients and oxygen, the lungs must be filled with air and emptied more frequently, the blood vessels to the muscles must be expanded and more channels opened up there to cope with the increased supply of blood.


Cells of the autonomic nervous system

The action of one system on different parts of an organ system may vary considerably. Signals from sympathetic nerves increase the strength and rate of the heartbeat, but the main arteries leaving the heart relax, so allowing an increased flow of blood. Sympathetic nerves usually cause the the musculature of the rest of the blood system to constrict. During digestion the blood flow to the gut is increased by the gut blood vessels relaxing. At the same time the blood supply to the muscles is reduced to allow for this.

The actions of the autonomic nervous system are many and varied (see table below). Experiments indicate that the sympathetic part is concerned with preparing the animal for violent action and for withstanding abnormal conditions. The parasympathetic system is more concerned with re-establishing normal conditions in the animal once it has been involved in strenuous actions, so that it is ready once more to expend large amounts of energy if necessary. Parasympathetic nerves initiate peristalsis and stimulate the production of digestive juices by the associated glands. Parasympathetic fibers also supply the heart, lowering the frequency and strength of the heartbeat.