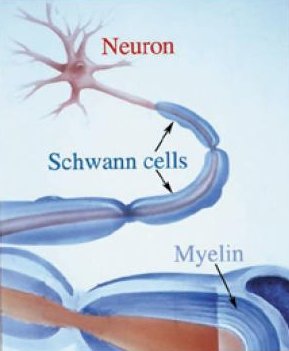 Myelin is the fatty substance that covers and protects nerves. Myelin is a layered tissue that sheathes the axons. This sheath around the axon acts like a conduit in an electrical system, ensuring that messages sent by axons are not lost en route. It allows efficient conduction of action potentials down the axon. Myelin consists of 70% lipids (cholesterol and phospholipid) and 30% proteins. It is formed by either of two types of glial cells: Schwann cells ensheathing neurons in the peripheral nervous system and oligodendrocytes insulating those of the central nervous system.

Myelin forms the so-called white matter in the nervous system and constitutes 50 percent of the weight of the brain. It is also an important component of the spinal cord, and of nerves in other parts of the body.

In multiple sclerosis the myelin sheaths of myelinated nerve fibers degenerate, leading to impaired sensory nerve and motor nerve function, and in most cases some degree of disability.