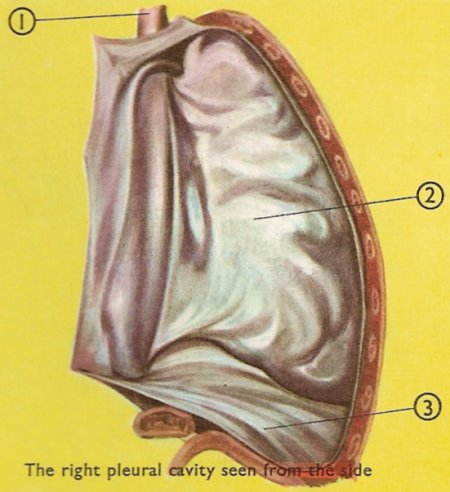 The pleura, also known as the pleural membrane, is the double cavity that lines the thoracic cavity and covers the exterior surface of the lungs. The pleura is a serous membrane forming a closed sac, with a small space, called the pleural cavity, between the two layers. The parietal layer of the pleura is firmly fixed on the outside to the chest wall, on the inside to the fibrous compartment called the mediastinum in which the heart lies, and underneath to the upper surface of the diaphragm. The visceral pleura is very thin and the lung tissue shows through it quite clearly.


Surface markings of the pleura

The boundaries of the pleural sac can be marked out as lines on the surface of the body. The lines, which indicate the limits of the parietal pleura where it lies close to the body surface, are referred to as the lines of pleural reflection.

The cervical pleura bulges upward into the neck and has a surface marking identical to that of the apex of the lung. A curved line may be drawn, convex upward, from the sternoclavicular joint to a point 2.5 cm (1 in) above the junction of the medial and intermediate thirds of the clavicle.

The anterior border of the right pleura runs down behind the sternoclavicular joint almost reaching the midline behind the sternal angle. It then continues downward until it reaches the xiphisternal joint. The anterior border of the left pleura has a similar course, but at the level of the fourth costal cartilage it deviates laterally and extends to the lateral margin of the sternum to form the cardiac notch. (Note that the pleural cardiac notch is not as large as the cardiac notch of the lung.) It then turns sharply downward to the xiphisternal joint.

The lower border of the pleura on both sides follows a curved line, which crosses the eighth rib in the midclavicular line and the tenth rib in the midaxillary line, and reaches the twelfth rib adjacent to the vertebral column, i.e., at the lateral border of the erector spinae muscle. Note that the lower margins of the lungs, cross to the sixth, eighth, and tenth ribs at the midclavicular lines, the midaxillary lines, and the sides of the vertebral column, respectively, and the lower margins of the pleura cross, at the same points respectively, the eighth, tenths, and twelfth ribs. The distance between the two borders corresponds to the costodiaphragmatic recess.


Disorders of the pleura

In certain lung infections, such as pneumonia or tuberculosis, the pleura become inflamed. This condition is called pleurisy. Air in the pleural cavity, known as pneumothorax, may cause collapse of a lung; the condition may occur spontaneously or may result from an injury. Cancerous tumors may develop in the pleura.