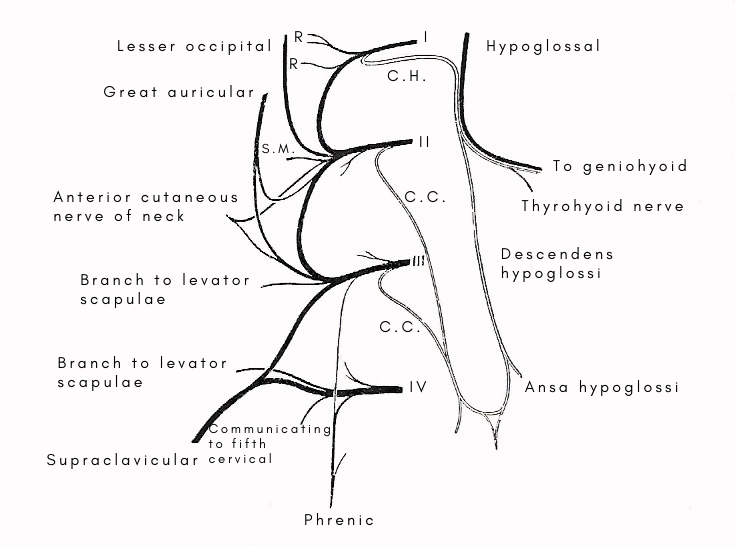 The cervical plexus is formed by the anterior primary rami of the upper four cervical nerves. It is situated in the upper part of the neck opposite a line drawn down the side of the neck from the root of the auricle to the level of the upper border of the thyroid cartilage. It lies behind the internal jugular vein and the deep fascia, on the front of the transverse process of the atlas and on the scalenus medius muscle.

The four cervical nerves concerned in the formation of the plexus appear above the corresponding vertebrae, and they increase in thickness from above downward.

The anterior primary ramus of the first cervical appears at the medial margin of the rectus lateralis, descends over the front of the transverse process of the atlas and joins the second. The combined first and second pass downward and laterally to join the third on the front of the scalenus medius; and a communicating loop connects the third with the fourth. A slender branch that descends from the fourth to the fifth connects the cervical plexus with the brachial.


Branches of the cervical plexus

The branches are communicating, cutaneous, and muscular.

The cutaneous branches are the lesser occipital, great auricular, anterior cutaneous, and supraclavicular.

The muscular branches are the phrenic, the descendens cervicalis, and numerous branches which are distributed to the rectus capitis lateralis, the prevertebral, scalene, and inter-transverse muscles, the levator scapulae, the sternomastoid, and the trapezius. The phrenic nerve is the most important branch of the plexus since it is the nerve that supplies the chief muscle of respiration – the diaphragm.

As the nerve lies in the scalenus anterior, it is under cover of the sternomastoid, at the lateral side of the internal jugular vein, and is overlapped by the vein. It is crossed by the inferior belly of the omohyoid, and branches of the thyrocervical trunk; the left nerve is crossed also by the thoracic duct. As the right nerve lies behind the innominate vein, it crosses the internal mammary artery from lateral to medial side, usually in front of the artery.

The root from the fifth cervical nerve usually joins the phrenic trunk on the surface of the scalenus anterior, but it may descend into the thorax before it effects a junction.