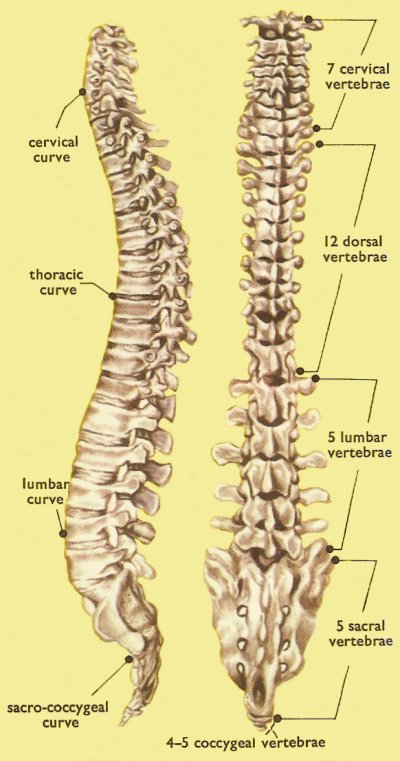 Spinal column, side and posterior views.

The spinal column is the columnar assemblage of the vertebrae from the cranium of the skull to the coccyx. The spinal column – also called the backbone, spine, or vertebral column – is the most important part of the skeleton and a defining feature of all vertebrates.

Each vertebra is attached to the two between it by strong and more or less elastic ligaments. Between each vertebra is a lenticular disk of fibro-cartilage, called an intervertebral disk, which acts as a buffer and shock absorber. By these arrangements the spinal column is rendered highly elastic, the transmission of shocks or jars is prevented, and a considerable general range of movements is enabled, although the motion between any two adjacent vertebrae is slight.


Natural curves of the spine

The elasticity of the column is further increased by the component vertebrae being arranged in curves instead of being placed perpendicularly. The curves should be exactly in the antero-posterior (forward to back) direction, any well-marked lateral (side to side) deviation from the perpendicular being abnormal. From their position, they are termed the cervical, thoracic or dorsal, lumbar, and sacro-coccygeal or pelvic curves. The thoracic and pelvic curves have their concavities in front, and thus enlarge the spaces in which the thoracic and pelvic viscera are contained; the two other curves are convex anteriorly, and thus afford support to the parts above them. The upper three curves are so arranged that their cords are in the same vertical line in the erect position of the body, and this vertical line corresponds with the line of gravity of the head.

The uses of these curves include the following.

The spinal canal, formed by the apposition of the spinal foramina or neural arches, and containing and protecting the spinal cord, varies in its size at different parts of the column. It is largest in its antero-posterior diameter in the neck and lower back, measuring at the last lumbar vertebrae about 2.2 cm (0.88 in), where the antero-posterior movements of the spine are greatest, and where the spinal cord is least closely attached to the vertebrae; while in its lateral diameter it is greatest at the atlas, where it measures nearly 3.8 cm (1.5 in).

A transverse section of the canal is nearly circular through the greater part of the back. The intervertebral foramina through which the nerves emerge vary in shape and position in different parts, but are always of sufficient size to prevent injurious pressure on the nerves during movement of the spine; and in the dorsal region, which is the ordinary seat of angular curvature, the nerves are so protected by bony arches that they may escape injury, even when the bodies of several dorsal vertebrae have been destroyed by ulceration.

The spinal cord is that part of the central nervous axis which is contained within the spinal canal. It extends from the foramen magnum, where it becomes continuous with the medulla oblongata, as far down as the lower border of the first lumbar vertebra. Below this point it is continued as a narrow thread containing little nervous matter, the filum terminate.


Curvature of the spine

Curvature of the spine is an exaggerated shaping of the spinal column. There are three major types. Scoliosis, or lateral curvature, can be due to bad posture or abnormality. Lordosis, an accentuation of the inward curve of the neck region or more commonly of the lower back region, results in a sway-back appearance. Kyphosis, ana accentuation of the outward curve behind the chest, can in severe form result in a hunchback appearance.