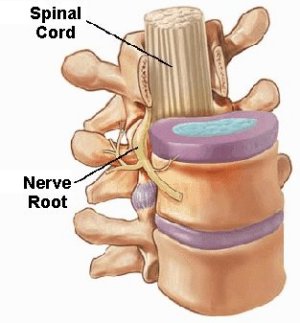 Vertebrae and intervertebral disks. The annulus fibrosus of the disks is shown in purple and the nucleus pulposus in blue. 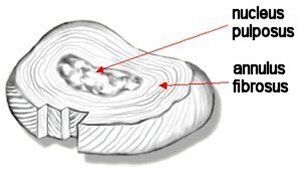 Section through an intervertebral diske.

An intervertebral disk is a flat, circular, plate-like structure containing cartilage which lines the joints between adjacent vertebrae in the spinal column. The intervertebral disks are responsible for one-quarter of the length of the vertebral column. They are thickest in the cervical and lumbar regions, where the movements of the vertebral column are greatest. They may be regarded as semi-elastic disks, which lie between the rigid bodies of the vertebrae, Their physical characteristics permit them to serve as shock absorbers when the load on the spinal column is suddenly increased, as when one is jumping from a height. Their elasticity allows the rigid vertebrae to move one upon the other. Unfortunately, their resilience is gradually lost with advancing age.

Each intervertebral disk consists of a hard outer layer which surrounds and keeps intact a soft gelatinous interior. The outer layer is a fibrocartilaginous ring, called the annulus fibrosus, in which the cartilage fibers are arranged in concentric lamellae. The collagen bundles pass obliquely between adjacent vertebral bodies, and their inclination is reversed in alternate lamellae. The more peripheral fibers are strongly attached to the anterior and posterior longitudinal ligaments of the vertebral column.

The inner core, known as the nucleus pulposus, serves to cushion the vertebrae during movements of the spine. In children, the nucleus pulposus an ovoid mass of gelatinous material containing a large amount of water, a small number of collagen fibers, and a few cartilage cells. It is normally under pressure and situated slightly nearer to the posterior than to the anterior margin of the disk.

The upper and lower surfaces of the bodies of adjacent vertebrae that abut onto the disk are covered with thin plates of hyaline cartilage.

The semifluid nature of the nucleus pulposus allows it to change shape and permits one vertebra to rock forward or backward on another, as in flexion and extension of the vertebral column.

A sudden increase in the compression load on the vertebral column causes the semifluid nucleus pulposa to become flattened. The outward thrust of the nucleus is accommodated by the resilience of the surrounding annulus fibrosus. No disks are found between the first two cervical vertebrae or in the sacrum or coccyx.

In older people, the intervertebral disks may wear out, becoming less supple and more susceptible to damage from injury. One of the most common forms of damage is a slipped disk, also known as a herniated disk or disk prolapse, in which part of the disk's soft center bulges out through a weak area in the hard outer layer. This may compress a spinal nerve root and produce symptoms, such as muscle weakness and/or pain in the back and leg.


Why we get shorter during the day and in old age

The jelly-like core – the nucleus pulposus – contains a lot of water. During the day, the weight of the upper body, pressing down on the spinal column, squeezes water out of the inner parts of the intervertebral disks. This flattens out the disks and results in us getting slightly shorter as the day wears on. The amount of water in the vertebral disks also decreases as we get older, which is one of the main reasons we tend to be shorter in our sixties and seventies than in our twenties.