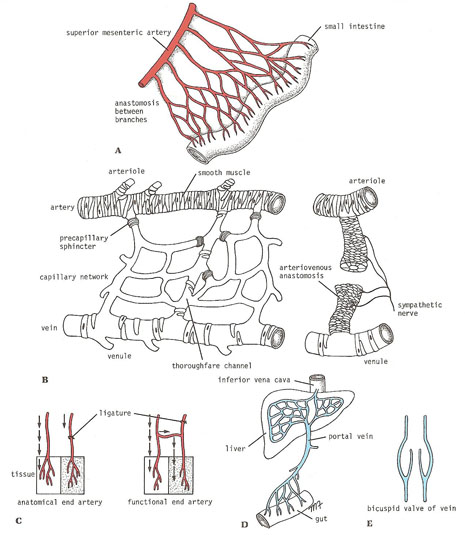 Fig 2. Blood vessel types and methods of union. (A) Anastomosis between branches of the superior mesenteric artery. (B) A capillary network and an arteriovenous anastomosis. (C) Anatomical end artery and functional end artery. (D) A portal system. (E)Structure of bicuspid valve in a vein.

A blood vessel is a channel or conduit through which blood is distributed to body tissues. Based on their structure and function, blood vessels are classified as either arteries, capillaries, or veins.

In humans, the blood vessels make up two closed systems of tubes that begin and end at the heart. One system, the pulmonary vessels, transports blood from the right ventricle to the lungs and back to the left atrium. The other system, the systemic vessels, carries blood from the left ventricle to the tissues in all parts of the body and then returns the blood to the right atrium.

The arteries convey blood from the heart and distribute it to the various tissues of the body by means of their branches. The smallest arteries, less than 0.1 mm in diameter, are called arterioles. The union of branches of arteries is called an anastomosis. There are no valves in arteries.

The veins are vessels that convey blood back to the heart; many of them possess valves. The smallest veins are called venules. The smaller veins, or tributaries, unite to form larger veins, which commonly join with one another to form venous plexuses. Medium-sized deep arteries are often accompanied by two veins, one on each side, called venae comitantes.

Veins leaving the gastrointestinal tract do not go directly to the heart, but converge on the portal vein; this enters the liver and breaks up again into veins of diminishing size, which ultimately join capillary-like vessels, called sinusoids, in the liver. A portal system is thus a system of vessels interposed between two capillary beds.

The capillaries are microscopic vessels in the form of a network connecting the arterioles to the venules.

In some areas of the body, principally the tips of the fingers and toes, there are direct connections between the arteries and veins without the intervention of capillaries. The sites of such connections are referred to as arteriovenous anastomoses.