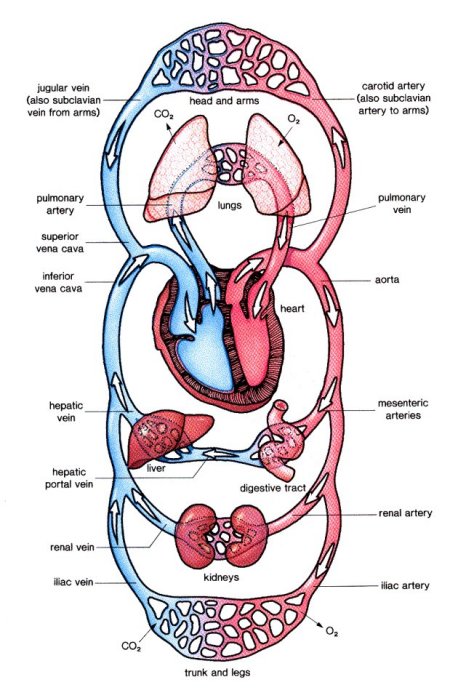 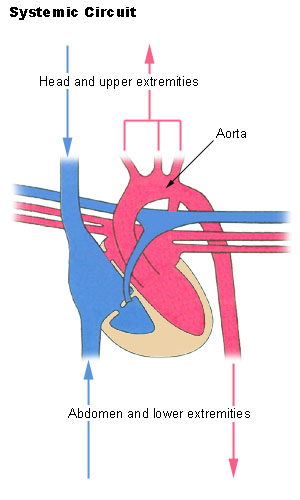 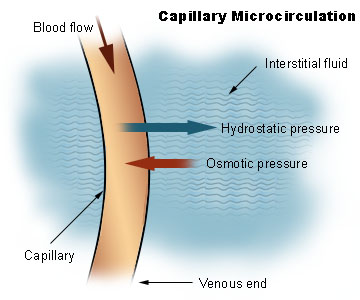 The circulatory system, also known as the cardiovascular system, is the system that, in humans and other higher animals, delivers oxygen and nutrients throughout the body by way of a complex network of vessels, including arteries, arterioles, capillaries, veins, and venules. Arteries, arterioles, and the microscopic capillaries carry blood away from the heart to all parts of the body and allow exchange of nutrients and wastes through capillary walls from blood to the tissues and organs. Veins carry deoxygenated blood back to the lungs for reoxygenation. If all the vessels of this network in an adult human body were laid out end-to-end, they would extend for about 60,000 mi (more than 96,500 km) – far enough to circle the Earth more than twice.

As in the adult, survival of the developing embryo depends on the circulation of blood to maintain homeostasis and a favorable cellular environment. In response to this need, the circulatory system makes its appearance early in development and reaches a functional state long before any other major organ system. Incredible as it seems, the primitive heart begins to beat regularly early in the fourth week following fertilization. The vital role of the circulatory system in maintaining homeostasis depends on the continuous and controlled movement of blood through the thousands of miles of capillaries that permeate every tissue and reach every cell in the body. It is in the microscopic capillaries that blood performs its ultimate transport function. Nutrients and other essential materials pass from capillary blood into fluids surrounding the cells as waste products are removed. Numerous control mechanisms help to regulate and integrate the diverse functions and component parts of the cardiovascular system in order to supply blood to specific body areas according to need. These mechanisms ensure a constant internal environment surrounding each body cell regardless of differing demands for nutrients or production of waste products.

The blood vessels of the body are functionally divided into two distinctive circuits: the pulmonary circuit and systemic circuit. The pump for the pulmonary circuit, which circulates blood through the lungs, is the right ventricle. The left ventricle is the pump for the systemic circuit, which provides the blood supply for the tissue cells of the body.

Pulmonary circulation transports oxygen-poor blood from the right ventricle to the lungs where blood picks up a new blood supply. Then it returns the oxygen-rich blood to the left atrium.

The systemic circulation provides the functional blood supply to all body tissues. It carries oxygen and nutrients to the cells and picks up carbon dioxide and waste products. Systemic circulation carries oxygenated blood from the left ventricle, through the arteries, to the capillaries in the tissues of the body. From the tissue capillaries, the deoxygenated blood returns through a system of veins to the right atrium of the heart.

All systemic arteries are branches, either directly or indirectly, from the aorta. The aorta ascends from the left ventricle, curves posteriorly and to the left, then descends through the thorax and abdomen. This geography divides the aorta into three portions: ascending aorta, aortic arch, and descending aorta. The descending aorta is further subdivided into the thoracic aorta and abdominal aorta.

After blood delivers oxygen to the tissues and picks up carbon dioxide, it returns to the heart through a system of veins. The capillaries, where the gaseous exchange occurs, merge into venules and these converge to form larger and larger veins until the blood reaches either the superior vena cava or inferior vena cava, which drain into the right atrium.

Most circulatory pathways in a fetus are like those in the adult but there are some notable differences because the lungs, the gastrointestinal tract, and the kidneys are not functioning before birth. The fetus obtains its oxygen and nutrients from the mother and also depends on maternal circulation to carry away the carbon dioxide and waste products.

In addition to forming the connection between the arteries and veins, capillaries have a vital role in the exchange of gases, nutrients, and metabolic waste products between the blood and the tissue cells. Substances pass through the capillary walls by diffusion, filtration, and osmosis. Oxygen and carbon dioxide move across the capillary walls by diffusion. Fluid movement across a capillary wall is determined by a combination of hydrostatic and osmotic pressure. The net result of the capillary microcirculation created by hydrostatic and osmotic pressure is that substances leave the blood at one end of the capillary and return at the other end.

Blood flow refers to the movement of blood through the vessels from arteries to the capillaries and then into the veins. Pressure is a measure of the force that the blood exerts against the vessel walls as it moves the blood through the vessels. Like all fluids, blood flows from a high pressure area to a region with lower pressure. Blood flows in the same direction as the decreasing pressure gradient: arteries to capillaries to veins.

The rate, or velocity, of blood flow varies inversely with the total cross-sectional area of the blood vessels. As the total cross-sectional area of the vessels increases, the velocity of flow decreases. Blood flow is slowest in the capillaries, which allows time for exchange of gases and nutrients. Resistance is a force that opposes the flow of a fluid. In blood vessels, most of the resistance is due to vessel diameter. As vessel diameter decreases, the resistance increases and blood flow decreases. Very little pressure remains by the time blood leaves the capillaries and enters the venules. Blood flow through the veins is not the direct result of ventricular contraction. Instead, venous return depends on skeletal muscle action, respiratory movements, and constriction of smooth muscle in venous walls.

Pulse refers to the rhythmic expansion of an artery that is caused by ejection of blood from the ventricle. It can be felt where an artery is close to the surface and rests on something firm.