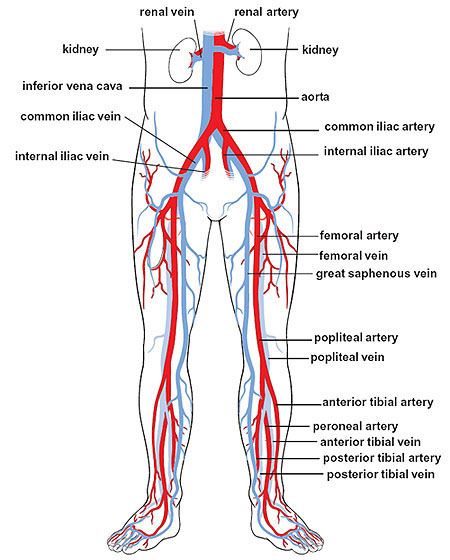 Major arteries and veins of the lower body.

The common iliac arteries arise on the front of the body of the fourth lumbar vertebra to the left of the medial plane, and, diverging from each other, proceed downward and laterally on the spinal column. After a course of about 2 in (5 cm), each vessel ends opposite the corresponding sacroiliac joint, at the level of the lumbosacral intervertebral disk, by dividing into external iliac and internal iliac arteries: the external iliac is the larger of the two branches and appears to be the continuation of the parent trunk; the internal iliac, which was the original continuation, passes backward and slightly downward into the true pelvis.

The common iliac arteries have no branches of any consequence except their terminal branches.

The right common iliac artery lies on the commencement of the inferior vena cava and on its own vein. It is covered with the peritoneum and is crossed near its origin by a branch or branches proceeding from the right sympathetic trunk to the hypogastric plexus.

The left artery lies on the fourth and fifth lumbar vertebrae, the sympathetic trunk, and the medial margin of the psoas major. It is covered with peritoneum and is crossed by branches from the left sympathetic trunk to the hypogastric plexus, by the superior rectal vessels in the medial limb of the pelvic mesocolon, and by one or two lower left colic vessels.

The external iliac arteries are the abdominal portions of the great arterial trunks which carry blood to the lower limbs. Each begins opposite the corresponding sacroiliac joint at the level of the lumbosacral intervertebral disk, and extends obliquely downward and sideward along the brim of the true pelvis to the mid-inguinal point, where it passes behind the inguinal ligament into the thigh and becomes the femoral artery.

The external iliac artery has only two branches – the inferior epigastric and the deep circumflex iliac. They arise from it immediately above the inguinal ligament.

The external iliac artery lies first on the medial surface of the psoas, and then on the front of the muscle. Its vein is behind its upper part, and along the medial side of its lower part. Its superficial surface is covered with peritoneum; but a number of structures intervene between it and the peritoneum.

On the right side, the ureter crosses the origin of the artery; at its lower end, the vas deferens and the deep circumflex iliac vein cross it behind the root of the inferior epigastric artery. The testicular artery and genitofemoral nerve are lateral to the upper part of the artery; the femoral branch of the nerve remains on its lateral side, but the genital branch and the artery pass on to the front of the lower part. In the female the ovarian artery crosses the external iliac an inch below its origin, and the round ligament of the uterus takes the place of the vas deferens. On the right side, though the cecum overlaps the artery, and the appendix and ileum cross, it is separated from them by peritoneum.

On the left side, the same structures intervene between the artery and the peritoneum; but, in addition, the artery is crossed by the terminal (iliac) part of the descending colon, which is in direct contact with the artery.