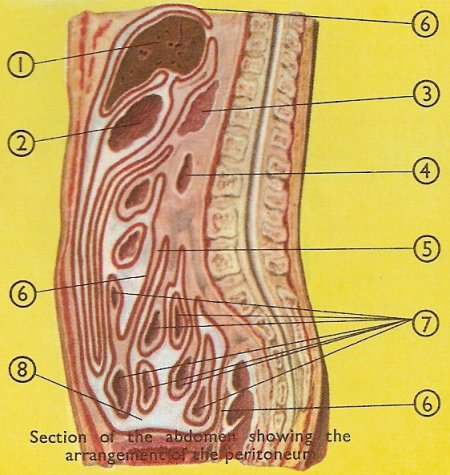 One particularly important part of the visceral peritoneum is a fold which is attached to the rear wall of the abdomen. This part is called the mesentery, and between the two layers of this fold lie the coils of the small intestine.

Inflammation of the peritoneum is called peritonitis.


Development of the peritoneum

The parietal and visceral peritoneum are parts of one continuous membrane which may be regarded as being originally a simple closed sac that lines the walls of a closed cavity. During development, as in the case of the pleura and the lung, the abdominal viscera have been invaginated into the sac as the fist might be pushed into a collapsible rubber-ball.

As the developing cavity and sac increase in size, a viscus may be pushed so far into the invaginated sac that it loses contact with the wall of the cavity. The parts of the "visceral" layer that cover the sides of the viscus then come together behind it and form a "fold" that stretches from the viscus to the wall. A fold of peritoneum therefore does not have the usual meaning of the word "fold". It is a double sheet of peritoneum connected with a viscus. At its visceral margin, its two layers separate to become continuous with the peritoneum on the surfaces of the viscus; at the parietal margin, they separate to become continuous with the parietal peritoneum on each side of the fold. Between the layers, vessels and nerves pass to the viscus.