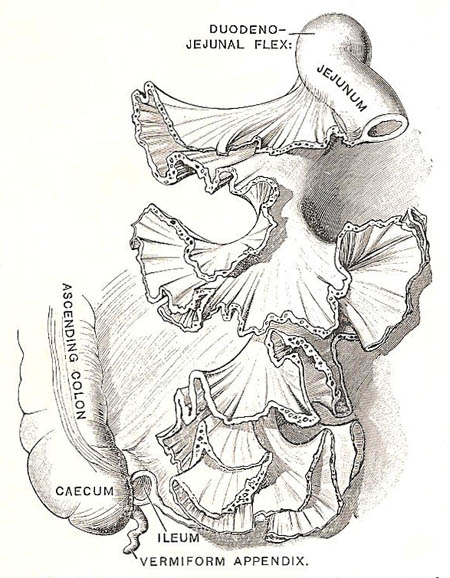 The mesentery in a subject which was hardened by formalin injection. The jejunum and ileum have been removed, and the foldings of the mesentery are displayed.

The mesentery is an extensive fold of peritoneum by which the jejunum and ileum are attached to and suspended from the posterior wall of the abdomen. Anteriorly, the mesentery has a free border where its two layers are continuous with each other and enclose the jejunum and ileum. This border is necessarily as long as the intestine which it encloses – i.e., about 20 ft – but this great length is not apparent because the mesentery is thrown into undulating folds to accommodate itself to the coils of the intestine. The parietal border is called the root of the mesentery, and is only about 15 centimeters (6 inches) in length. The depth of the mesentery from root to intestine, over a great part of its extent, is 15–20 cm (6–8 in), and diminishes to nothing at each end.


Attachments of the mesentery

The root extends obliquely from the duodenal-jejunal flexure to the entrance of the ileum into the large intestine, and crosses in sequence (1) the duodenum, (2) the aorta, (3) the inferior vena cava, and (4) the right psoas major with the ureter and testicular (or ovarian) vessels on its surfaces.


Contents of the mesentery

The contents of the mesentery, in addition to the intestine (though that is a matter of definition), are: (1) Extraperitoneal tissue and a variable quantity of fat. (2) Over a hundred mesenteric lymph glands – largest and most numerous near the root with large numbers of "lacteal" lymph vessels passing to them from the intestine. (3) Superior mesenteric vessels in the root, and their numerous branches and tributaries which supply the jejunum and ileum. (4) A very large number of soft sympathetic nerves for the supply of the intestine. This generous supply entails the cutting of a large number of nerves when a portion os the intestine is removed and section of the nerves accounts for the "surgical shock" that follows such an operation.