The portal vein and its tributaries. 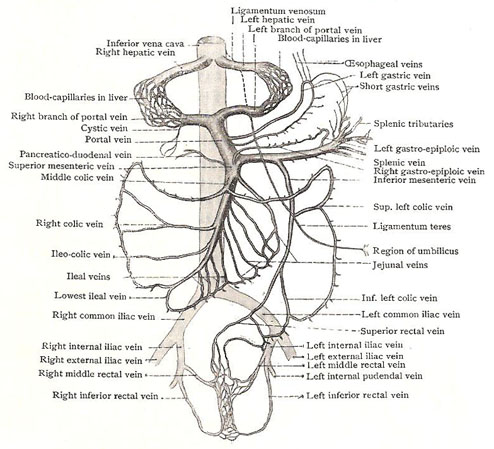 Schema of the portal system of veins and its connections with systemic veins. It must be remembered that the systemic blood carried by the hepatic artery also enters the capillaries of the liver, and the hepatic veins contain therefore both portal and systemic blood.

The portal vein is peculiar among veins in that it begins like other veins by the union of tributaries, but ends like an artery by dividing into branches. It collects productions of the digestion of carbohydrates and proteins from the intestines, and conveys them to the liver. In addition to this important function, the whole portal system acts as a reservoir of blood, for the needs of the general circulation. It has been calculated that the portal system can contain about one-third of the total amount of blood in the body – the same proportion that passes through the liver minute. The amount of blood can be increased or diminished by physiological variations in the width of the arteries by which it enters the system and of the terminal portions of the hepatic veins, by which it leaves it. The spleen may be regarded as a specialized portion of the portal reservoir. Valves are absent from the portal vein and its large tributaries, but are present in some of its smaller tributaries, notably the gastric veins.

The portal vein is formed behind the neck of the pancreas by the union of the superior mesenteric and the splenic veins. It runs upward and to the right, posterior to the first part of the duodenum, and enters the lesser omentum. It then ascends in front of the opening into the lesser sac to the portal hepatis, where it divides into right and left terminal branches.

There are only a few direct tributaries of the portal vein. The splenic and superior mesenteric veins form it; a pancreaticoduodenal vein joins it behind the duodenum; the right and left gastric veins join it immediately before it enters the lesser omentum; and the cystic vein from the gall bladder joins its right branch.

The right branch of the portal vein receives the cystic vein, and then sinks into the right lobe of the liver. The left branch – narrower and longer – runs to the left end of the porta to sink into the left lobe.

At the left end of the porta, the left branch is joined by the ligamentum venosum from behind and by the ligamentum teres from in front. Some small veins, called para-umbilical veins, run around the long ligament and connect the left branch with the superficial veins around the umbilicus; when there is obstruction to the flow of blood through the liver, the para-umbilical veins enlarge and drain off some of the blood into enlarged superficial veins which radiate from the umbilicus – the so-called caput medusae. Other communications are established with systemic veins by some of the outlying veins of the splenic system – notably at the lower end of the esophagus by the left gastric vein, and in the pelvis by the superior rectal vein.