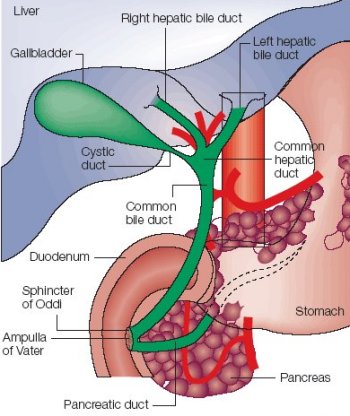 A bile duct is any of the ducts by which bile is carried from the liver, first to the gall bladder and then to the duodenum (the first section of the small intestine).

The bile duct system starts as tiny tubular canals called canaliculi that surround the liver cells and collect the bile. The canaliculi join together to form a network of bile ducts of increasing size, which emerge from the liver, on the underside, as the two hepatic ducts. These ducts join within or just outside the liver to form the common hepatic duct. Shortly after the junction, another duct, known as the cystic duct, branches off to form the gall bladder, which lies in a hollow in the undersurface of the liver. The continuation of the common hepatic duct past the junction with the cystic duct is known as the common bile duct. This leads directly into the duodenum.