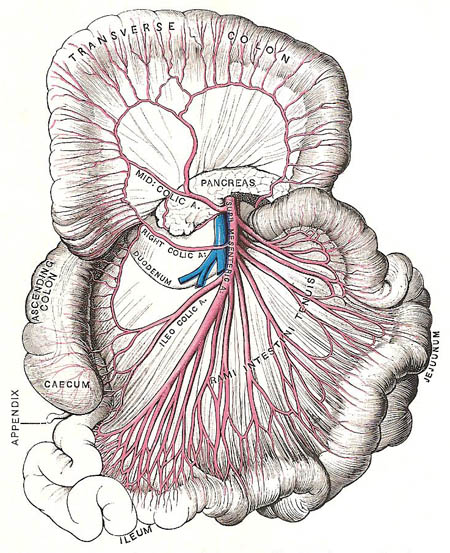 The superior mesenteric is a large artery that springs from the front of the abdominal aorta opposite the first lumbar vertebra about a quarter of an inch below the celiac artery. It descends to the front of the third part of the duodenum, where it enters the mesentery; and then, in the root of the mesentery, it runs downward and to the right with a slight curve whose convexity is toward the left; and it terminates in the right iliac fossa, near the end of the ileum, by anastomosing with a branch of the ileo-colic artery.

Throughout its course, the superior mesenteric artery is surrounded by the superior mesenteric plexus of sympathetic nerves, which springs from the lower part of the celiac plexus; and it is accompanied by its vein, which lies close along its right sid. At its origin, it is behind the body of the pancreas, and is closely related to the two large veins that cross the front of the aorta from the left to right – namely, the splenic vein, which passes above its origin, and the left renal vein, which passes below it. As the artery begins its descent, it crosses in front of the left renal vein, and, after escaping from behind the body of the pancreas, it crosses in front of the uncinate process of the pancreas to reach the third part of the duodenum. Beyond that point, its posterior relations are the same as those of the root of the mesentery.

The branches of the superior mesenteric artery are numerous and are accompanied by veins and by offsets of the superior mesenteric plexus of nerves. They supply the lower parts of the head of the pancreas and duodenum, the jejunum, and ileum, and vermiform appendix, the cecum, and the ascending and transverse colon. The jejunal and ileal branches arise from its convex or left border; the others form its concave border.

The jejunal and ileal branches – twelve or more in number – run obliquely toward the intestine between the layers of the mesentery, dividing and anastomosing to form a series of arterial arcades; smaller branches spring from the first series of arcades and divide and unite to form a second series, and, in the lower part of the mesentery, three or four tiers of arcades are formed. Numerous small arteries spring from the last series of arcades, and, alternating with one another, pass round opposite sides of the gut, gradually sinking deeper into the substance of its walls.

The middle colic artery arises as the superior mesenteric escapes from behind the body of the pancreas. It enters the transverse mesocolon at once, and runs downward and forward in it, dividing into right and left branches. Secondary and tertiary branches arise from these, forming variable arterial arcades, but much less richly than in the case of the arteries to the small intestine. The ultimate branches supply the transverse colon; and, towards its ends, they anastomose with branches of the right and left colic arteries. Since the middle colic vessels lie in the transverse mesocolon, they are posterior relations of the stomach.

The inferior pancreatico-duodenal artery is a small vessel that arises immediately before the superior mesenteric reaches the duodenum. It runs to the right between the head of the pancreas and the third part of the duodenum, giving branches to both; and these branches anastomose with branches of the superior artery of the same name.

The ileo-colic artery arises in common with the right colic or a little lower down. It runs toward the right behind the peritoneum; and it also ends by dividing into ascending and descending branches which give twigs to the ascending colon. The descending branch, besides supplying the colon, sends, branches to the cecum, a branch to the vermiform appendix, and a branch to the lowest part of the ileum which anastomoses with the end of the superior mesenteric artery.

The superior mesenteric vein is a wide vessel. Since it lies close along the right side of its artery, it has the same relations, except at its uppermost part, where it inclines slightly to the right to end behind the neck of the pancreas, by joining the splenic vein to form the portal vein. Its tributaries are the veins that accompany the branches of the artery, and, in addition, the right gastro-epiploic vein; occasionally, it receives the inferior mesenteric vein and a pancreatico-duodenal vein.