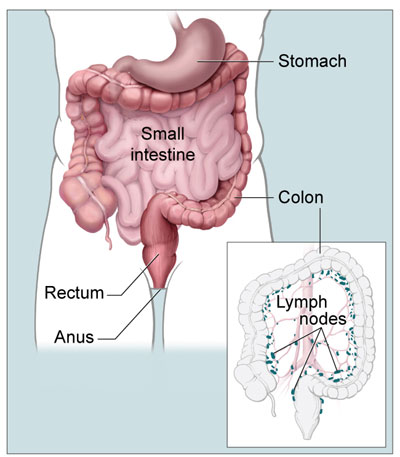 The colon is a part of the large intestine in humans and other mammals whose primary function is the reabsorption of water from feces. The colon runs from the cecum to the rectum and is divided anatomically into four main sections known as the ascending, transverse, and descending limbs, and the sigmoid (or pelvic) colon.

The ascending, transverse, and descending colon are arranged round the abdominal cavity (see abdomen) like an inverted "U" but the two vertical limbs lie in the paravertebral gutter on each side and therefore behind the plane of the transverse limb, which sags down towards the pelvis. The junctions of the transverse colon with the vertical limbs at either end are called flexures – the hepatic flexure on the right under cover of the liver and the splenic flexure on the left in relation to the spleen. Because of the greater bulk of the liver on the right side, the hepatic flexure is several centimeters lower than the splenic. The colon in general has the following features:

The internal structure is like that of the large intestine in general, but the serous coat is incomplete where the colon is only partly peritonized, and the mucosa is smooth and pale.

The ascending colon lies on the posterior abdominal wall, mainly on the quadratus lumborum muscle, and is relatively immobile. The hepatic flexure lies in front of the lower pole of the right kidney and is overhung by the right lobe of the liver.

The transverse colon arches across the abdomen, lying below the stomach and obscured by the great omentum. It is very mobile since it has a mesentery, the transverse mesocolon, derived from the doubling back of the layers of the great omentum which diverge to enclose the bowel and rejoin to form its mesentery as they pass to the posterior abdominal wall. The transverse colon lies in front of most of the structures of the posterior abdominal wall at this level – duodenum, pancreas, great vessels, and portions of the kidneys on either side – and the prominence of the lumbar spine behind arches the colon forwards. The splenic flexure lies in front of the left kidney, immediately below the spleen, with the diaphragm behind.

The descending colon, like the ascending, has no mesentery and is plastered onto the posterior abdominal wall behind the peritoneum. It runs down from the splenic flexure as far as the pelvic brim on the left side, where the shallow left iliac fossa gives way to the true pelvis, crossing in front of the psoas muscle, and the left common iliac artery and vein.

The sigmoid colon, the continuation of the descending colon, extends from the pelvic brim to the beginning of the rectum, opposite the middle of the sacrum in the depths of the true pelvis. It has a long mesentery, the pelvic mesocolon, and is loose and mobile.

Colitis is Inflammation of the colon. Infection with viruses, bacteria, or parasites may cause it, often with enteritis. Inflammatory colitis can occur without bacterial infection in the chronic diseases, ulcerative colitis and Crohn's disease. Impaired blood supply may also cause colitis. Symptoms include colic and diarrhea (with slime or blood). Severe colitis can cause serious dehydration or shock. Treatments include antibiotics, and, for inflammatory colitis, steroids, aspirin derivatives, or, occasionally, surgery.