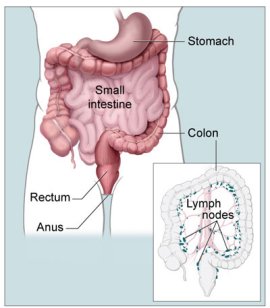 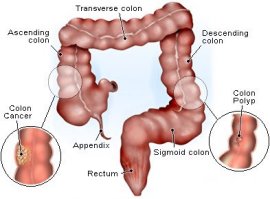 Colon cancer is cancer that forms in the tissues of the colon (the longest part of the large intestine). Most colon cancers are adenocarcinomas (cancers that begin in cells that make and release mucus and other fluids).

Rectal cancer is cancer that forms in the tissues of the rectum (the last several inches of the large intestine before the anus).

Partly digested food enters the colon from the small intestine. The colon removes water and nutrients from the food and turns the rest into waste (feces or stool). The waste passes from the colon into the rectum and then out of the body through the anus.

Research has shown that people with certain risk factors are more likely than others to develop colorectal cancer. A risk factor is something that may increase the chance of developing a disease.

Studies have found the following risk factors for colorectal cancer:

- Familial adenomatous polyposis (FAP) is a rare, inherited condition in which hundreds of polyps form in the colon and rectum. It is caused by a change in a specific gene called APC. Unless FAP is treated, it usually leads to colorectal cancer by age 40. FAP accounts for less than 1% of all colorectal cancer cases.

Family members of people who have HNPCC or FAP can have genetic testing to check for specific genetic changes. For those who have changes in their genes, health care providers may suggest ways to try to reduce the risk of colorectal cancer, or to improve the detection of this disease. For adults with FAP, the doctor may recommend an operation to remove all or part of the colon and rectum.

Screening tests help your doctor find polyps or cancer before you have symptoms. Finding and removing polyps may prevent colorectal cancer. Also, treatment for colorectal cancer is more likely to be effective when the disease is found early.

The following screening tests can be used to detect polyps, cancer, or other abnormal areas.

Your doctor can explain more about each test:

A common symptom of colorectal cancer is a change in bowel habits. Symptoms include:

Most often, these symptoms are not due to cancer. Other health problems can cause the same symptoms. Anyone with these symptoms should see a doctor to be diagnosed and treated as early as possible.

Usually, early cancer does not cause pain. It is important not to wait to feel pain before seeing a doctor.

If you have screening test results that suggest cancer or you have symptoms, your doctor must find out whether they are due to cancer or some other cause. Your doctor asks about your personal and family medical history and gives you a physical exam. You may have one or more of the tests described in the "Screening" section.

If tests show an abnormal area (such as a polyp), a biopsy to check for cancer cells may be necessary. Often, the abnormal tissue can be removed during colonoscopy or sigmoidoscopy. A pathologist checks the tissue for cancer cells using a microscope.

You may want to ask your doctor these questions before having a biopsy:

If the biopsy shows that cancer is present, your doctor needs to know the extent (stage) of the disease to plan the best treatment. The stage is based on whether the tumor has invaded nearby tissues, whether the cancer has spread and, if so, to what parts of the body.

Your doctor may order some of the following tests:

Your doctor may also use other tests (such as MRI) to see whether the cancer has spread. Sometimes staging is not complete until after surgery to remove the tumor.

Read about how colon and ractal cancer is treated.