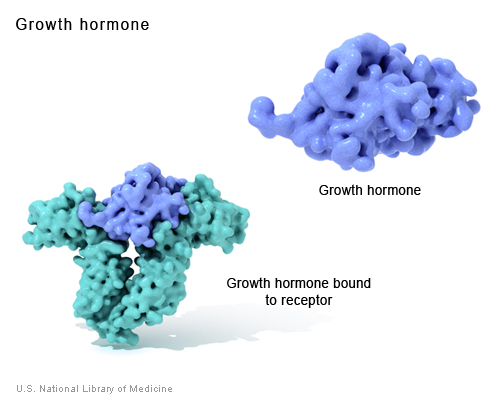 Growth hormone, also known as somatotrophin, is a polypeptide hormone synthesized and secreted by the anterior pituitary gland which stimulates growth and cell reproduction in humans and other vertebrate animals. It also promotes the breakdown of fats as an energy source, rather than glucose.

Production of growth hormone (GH) is greatest during early life. Its secretion is controlled by the opposing actions of two hormones from the hypothalamus: growth hormone-releasing hormone (somatoliberin), which promotes its release, and somatostatin, which inhibits it.

Growth hormone is used to treat short stature when the underlying cause is a pituitary gland disorder. It is also used for children with genetic disorders associated with short stature, such as Turner's syndrome. Treatment is usually started in early childhood. Growth hormone is sometimes given with an anabolic steroid, which also promotes tissue growth.

There is a slight risk that diabetes mellitus may develop during treatment. Some people have antibodies to growth hormone, but this does not seem to reduce its effectiveness.

In the past, growth hormone was extracted from human corpses; it is now prepared synthetically.