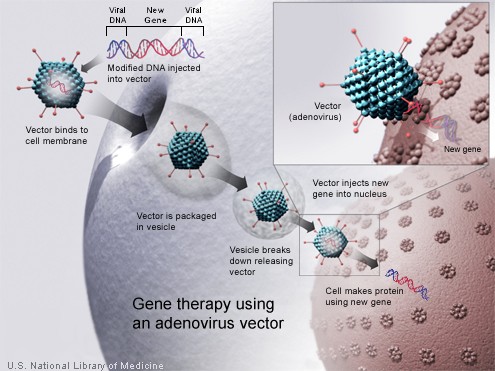 An example of gene therapy. new gene is injected into an adenovirus vector, which is used to introduce the modified DNA into a human cell. If the treatment is successful, the new gene will make a functional protein.

Single-gene disorders are characterized by how they are passed down in families. There are six basic patterns of single gene inheritance:

The observed effect of a gene (the appearance of a disorder) is called the phenotype.

People with one copy of a recessive disease gene are called carriers. Carriers usually don't show the disease. However, the gene can often be found by sensitive laboratory tests.

In autosomal dominant inheritance, the abnormality or abnormalities usually appear in every generation. Each affected child of an affected parent has a 50% chance of inheriting the disease.

In autosomal recessive inheritance, the parents of an affected individual may not show the disease. On average, the chance of an affected child's brothers or sisters having the disease are 1 in 4. Males and females are equally likely to be affected. For a child to have symptoms of an autosomal recessive disorder, the child must receive the defective gene from both parents.

Because most recessive disorders are rare, a child is at increased risk of a recessive disease if the parents are related. Related individuals are more likely to have inherited the same rare gene from a common ancestor.

In X-linked dominant inheritance, the presence of the defective gene appears in females even if there is also a normal X chromosome present. Since males pass the Y chromosome to their sons, affected males will not have affected sons. All of their daughters will be affected, however. Sons or daughters of affected females will have a 50% chance of getting the disease.

Only a few, rare, disorders are X-linked dominant. One of these is hypophosphatemic rickets, also called vitamin D-resistant rickets.

In chromosomal disorders, the defect is due to an excess or lack of the genes contained in a whole chromosome or chromosome segment.

Many of the most common diseases involve interactions of several genes and the environment (for example, illnesses in the mother and medications). These include:

Mitochondria are organelles found in most of the body's cells. They are responsible for energy production inside cells. Mitochondria contain their own private DNA.

Mitochondrial disorders can appear at any age. They have a wide variety of symptoms and signs. These disorders may cause:

For example, to reverse disease caused by genetic damage, researchers can isolate normal DNA and package it into a vector – a molecular delivery vehicle usually made from a disabled virus. The vector is then used to infect a target cell, usually from a tissue affected by the illness, such as liver or lung cells. The vector unloads its DNA cargo, which then begins producing the missing protein and restores the cell to normal.