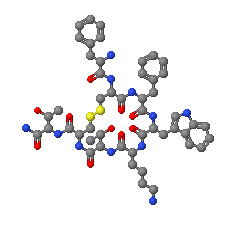 Somatostatin, also known as growth hormone inhibiting hormone (GHIH), is a hormone, secreted by the hypothalamus, which inhibits the release of growth hormone (GH) and thyroid-stimulating hormone (TSH) from the anterior pituitary gland. The secretion of somatostatin is stimulated by various factors, including very high blood glucose levels, which result from the effect that growth hormone has on glucose metabolism. It is also produced by the delta (D) cells of the islets of Langerhans in the pancreas and can inhibit the release of glucagon and insulin from the islets. Additionally, somatostatin inhibits the release of gastrointestinal hormones, thereby lowering the rate of gastric emptying and reducing smooth muscle contractions and blood flow within the intestine.

A molecule of somatostatin comprises two peptides, one built of 14 amino acids, the other of 28 amino acids.