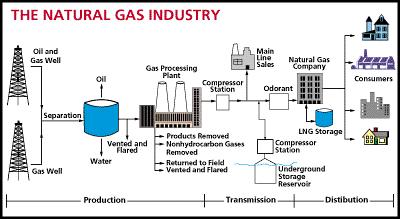 Natural gas is a mixture of gaseous hydrocarbons occurring in reservoirs of porous rock (commonly sand or sandstone) capped by impervious strata. It is often associated with petroleum, with which it has a common origin in the decomposition of organic matter in sedimentary deposits. Natural gas consists largely of methane and ethane, with also propane and butane (separated for bottled gas), some higher alkanes (used for gasoline), nitrogen, oxygen, carbon dioxide, hydrogen sulfide, and sometimes valuable helium. It is used as an industrial and domestic fuel, and also to make carbon-black and chemical synthesis. Natural gas is transported by large pipelines or (as a liquid) in refrigerated tankers.

Millions of years ago, the remains of plants and animals decayed and built up in thick layers. This decayed matter from plants and animals is called organic material – it was once alive. Over time, the mud and soil changed to rock, covered the organic material and trapped it beneath the rock. Pressure and heat changed some of this organic material into coal, some into oil (petroleum), and some into natural gas – tiny bubbles of odorless gas. The main ingredient in natural gas is methane, a gas (or compound) composed of one carbon atom and four hydrogen atoms.

In some places, gas escapes from small gaps in the rocks into the air; then, if there is enough activation energy from lightning or a fire, it burns. When people first saw the flames, they experimented with them and learned they could use them for heat and light.


how natural gas is obtained

The search for natural gas begins with geologists who locate the types of rock that are known to contain gas and oil deposits. Today their tools include seismic surveys that are used to find the right places to drill wells. Seismic surveys use echoes from a vibration source at the Earth's surface (usually a vibrating pad under a truck built for this purpose) to collect information about the rocks beneath. Sometimes it is necessary to use small amounts of dynamite to provide the vibration that is needed.

Scientists and engineers explore a chosen area by studying rock samples from the earth and taking measurements. If the site seems promising, drilling begins. Some of these areas are on land but many are offshore, deep in the ocean. Once the gas is found, it flows up through the well to the surface of the ground and into large pipelines. Some of the gases that are produced along with methane, such as butane and propane, are separated and cleaned at a gas processing plant. The by-products, once removed, are used in a number of ways. For example, propane can be used for cooking on gas grills.

Because natural gas is colorless, odorless and tasteless, mercaptan (a chemical that has a sulfur like odor) is added before distribution, to give it a distinct unpleasant odor (like that of rotten eggs). This serves as a safety device by allowing it to be detected in the atmosphere, in cases where leaks occur.

We can also use machines called "digesters" that turn today's organic material (plants, animal wastes, etc.) into natural gas. This replaces waiting for thousands of years for the gas to form naturally.

The gas companies collect it in huge storage tanks, or underground, in old gas wells. The gas remains there until it is added back into the pipeline when people begin to use more gas, such as in the winter to heat homes.

Natural gas is moved by pipelines from the producing fields to consumers. Since natural gas demand is greater in the winter, gas is stored along the way in large underground storage systems, such as old oil and gas wells or caverns formed in old salt beds. The gas remains there until it is added back into the pipeline when people begin to use more gas, such as in the winter to heat homes.

When chilled to very cold temperatures, approximately -260°F, natural gas changes into a liquid and can be stored in this form. Because it takes up only 1/600th of the space that it would in its gaseous state, Liquefied natural gas (LNG) can be loaded onto tankers (large ships with several domed tanks) and moved across the ocean to deliver gas to other countries. When this LNG is received in the United States, it can be shipped by truck to be held in large chilled tanks close to users or turned back into gas to add to pipelines.