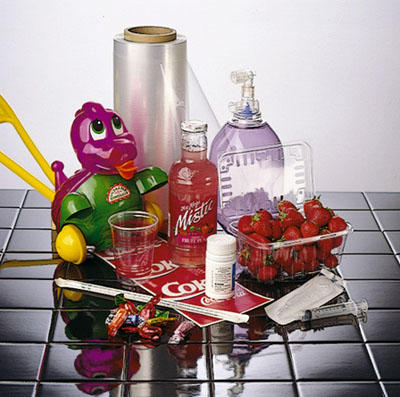 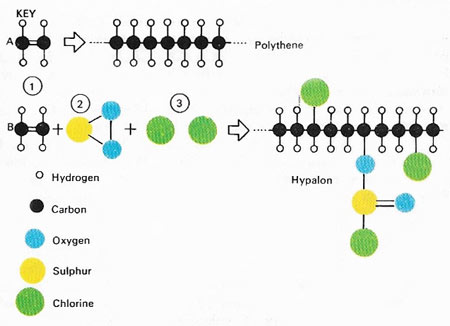 Fig 2. Plastics and rubber are chemically similar in their structures – they can even be made from the same starting material, called a monomer. This diagram shows the polymerization of ethylene (1) to form the plastic polyethylene (polythene). The same monomer will react with sulphur dioxide (2) and chlorine (3) to produce the synthetic rubber called Hypalon. Natural rubber is composed of similar long-chain polymer molecules. They slip over each other when the rubber is stretched and return as before when the tension is released, giving both kinds of rubber their elasticity. 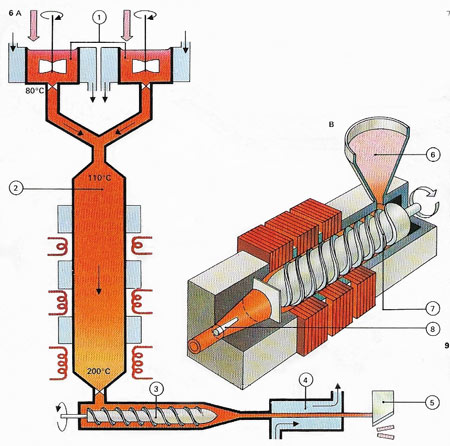 Fig 3. Making plastics is typified by the manufacture of polystyrene. The chemical to be polymerized is styrene, obtained from the petroleum industry. This is first part-polymerized (A), with the aid of a catalyst, in stirred tanks (1). The material then passes from the tank to a large reactor (2) cooled by a water coil to control the heat given off by the polymerization reaction.

At the bottom of the reactor the temperature is 200°C (392°F) and nearly all the styrene has been polymerized to a hot, liquid plastic. This is fed by an extruder (3) to a water bath (4) which cools it to a hard solid. The plastic can then be machined into small chips (5) ready for transport. Products are made (B) from the plastic chips (6) by forcing the melted material, with a heated extruder (7), into a die or mould (8). Polystyrene is used for many household articles.

A plastic is a material that can be molded (at least in production) into desired shapes. A few natural plastics are known, e.g. bitumen, resins, and rubber, but almost all are man-made, mainly from petrochemicals, and are available with a vast range of useful properties: hardness, elasticity, transparency, toughness, low density, insulating ability, inertness, and corrosion resistance, etc. They are invariably high polymers with carbon skeletons, each molecule being made up of thousands or even millions of atoms. Plastics fall into two classes: thermoplastic and thermosetting.

The first man-made polymers to be called plastics were compounds made from a naturally occurring polymer, cellulose. Celluloid (cellulose nitrate), was one such early plastic. It was most famous, or infamous, as the material of highly flammable films and dolls. Celluloid was the first commercial synthetic plastic. Developed by John Wesley Hyatt (1837–1920) and his brothers (1869), it was used for early motion picture film. It is a colloidal dispersion of nitrocellulose and camphor. Celluloid is tough, strong resistant to water, oils, and dilute acids, and thermoplastic. It is highly inflammable, and has been largely replaced by other plastics.

Another early plastic with the trade name Bakelite, is a synthetic resin discovered by the Belgian-born chemist Leo Baekeland. It is made by the condensation reaction of methanal (formaldehyde) and phenol to form large polymer molecules. The first modern synthetic plastic (1909), Bakelite is a hard, strong material, that was used as an electrical insulator, in radio and telephone casings, and such diverse products as kitchenware, jewelry, pipe stems, and toys. It was the first of the thermosetting plastics.

Thermosetting plastics, although moldable when produced as simple polymers, are converted by heat and pressure, and sometimes by an admixed hardener, to a cross-linked, infusible form. They set hard on heating and cannot be re-melted without decomposing. Bakelite and other phenol resins were the first to be discovered.

More recently developed thermosetting plastics include melamine plastics, used for plastic "crockery" and decorative laminates and the epoxy resins, most familiar as tubes of household glue. When mixed with a catalyst (provided in a separate tube), an epoxy cement polymerizes to become very strong, hard and resistant to chemicals. For these reasons many protective paints and coatings also contain epoxy compounds. Other thermosetting plastics include polyesters, silicones, urea-formaldehyde, and melanine-formaldehyde resins, and some polyurethanes.

The other great group of plastics are the thermoplastics, so called because they soften or melt reversibly on heating. They include celluloid and other cellulose plastics, lucite, nylon, polythene, styrene polymers, vinyl polymers, polyformaldehyde, polycarbonates, and acrylic. An acrylic is any one of a group of synthetic, short-chain unsaturated carboxylic acids derivatives. Variation in the reagents and the method of formation yields either hard and transparent, soft and resilient, or liquid products. Their transparency, toughness, and dimensional stability make acrylics useful for molded structural parts, lenses, adhesives, and paints. Familiar articles made from them include polyethylene (polythene) bowls and buckets; polyester and nylon fabrics; PTFE non-stick pan liners and PVC clothing.

Most plastics are mixed with stabilizers, fillers, dyes, or pigments and plasticizers if needed. There are several fabrication processes: making films by calendering (squeezing between rollers), casting or extrusion, and making objects by compression molding, injection molding (melting and forcing into a cooled mold) and casting.

Plastics are generally molded into the shapes required. Thermosetting plastics are often molded in part-cured pellet form. These are compressed, heated until they flow and allowed to harden to take on the shape of the mold. Thermoplastics are frequently pressure-molded. Pipes, rods and sheets of plastics and rubbers are generally formed by extrusion in which the material is forced through a hole like toothpaste from a tube. The extruder is often equipped with a screw for forcing the materials through a shaped hole or die.