Fig 1. Hydrocarbons from petroleum take the form of molecules that may be linear or long-chain (with a long "backbone" of carbon atoms, with or without a branch) or basically cyclic (with most of the carbon atoms in a ring). The sizes and shapes of molecules determine such properties as boiling point and octane number (fuel rating). Normal heptane, having a straight chain, boils at 98.4°C (209°F), whereas isooctane, with a branched chain, boils at 99.3°C (210°F); isooctane is a good fuel but n-heptane has a low rating. Methyl cyclopentane has a five-membered carbon ring and toluene has a six-membered ring. 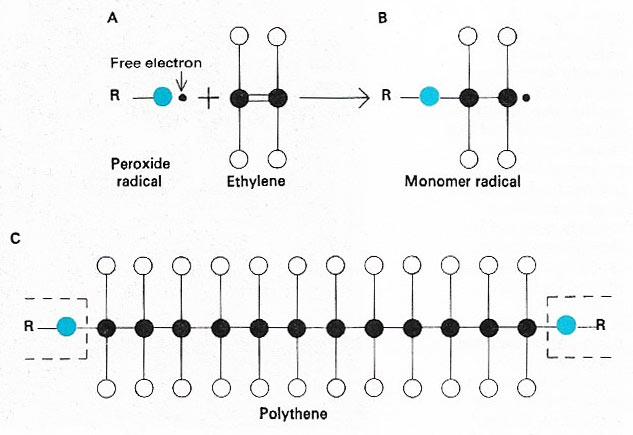 Fig 2. Simple hydrocarbons such as ethylene can be made from petroleum products. They are valuable for making plastics such as polyethylene (polythene) and detergents. The double bond in ethylene (A) can be "sprung" and reacted with a radical R to give an active compound (B) that can spring other double bonds repeatedly and give a long-chain polymer – a plastic (C). Such long-chain radicals can also be reacted with acids to form more complex molecules such as detergents.

A petrochemical is any chemical made from petroleum or natural gas. The refining of petroleum is undertaken on a large scale not only for the fuels obtained (gasoline (petrol), paraffin, fuel oil, and natural gas) but also for the wide range of chemicals that can be derived. These chemicals include the common alkanes (paraffins) and alkenes (olefins), benzene, toluene and naphthalene, plus the inorganic substances carbon black, sulfur, ammonia, and hydrogen peroxide. Polymers, detergents, solvents, and nitrogen fertilizers are major products.