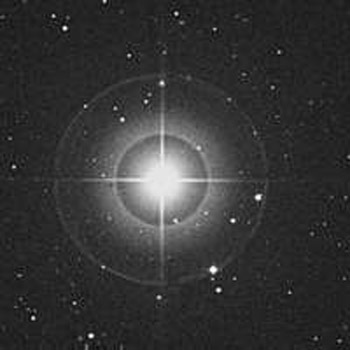 Chara (Beta Canum Venaticorum) is the second brightest star in the constellation Canes Venatici (the Hunting Dogs); its Greek name name means "dear" or "joy." Chara is one of the nearest Sunlike stars. In fact, it resembles the Sun so closely in age, type, luminosity, metallicity, and other properties, that it ranks in the top five stars most likely to support life in a shortlist drawn up in 2006 by astrobiologist Margaret Turnbull, one of the authors of HabCat (Catalog of Nearby Habitable Systems). It can be expected to feature prominently in future searches aimed at detecting signs of extraterrestrial life and intelligence.

Lying at a distance of only 27 light years, Chara is G-type star with a surface temperature of 5860 K (just 80 K hotter than the Sun), a mass 8% greater than the Sun's, a radius 11% larger, and a luminosity 20% greater. Since main sequence stars brighten and swell somewhat as they age, Chara may be one or two billion years older than the Sun. Chara has also been detected in the X-ray part of the spectrum, implying that it too has a surrounding hot corona, as expected. Extending the solar similarity, Chara even rotates at a similar speed. The metallicity – a measure of the "heavy" element abundance – of Chara is in the range 59–120% of solar, placing it well within the range for which a star could be expected to host a system of planets. The orbit of a hypothetical Earth-like planet, capable of supporting liquid water on its surface, would have an orbit around Chara at a mean distance of approximately 1.1 AU (10% greater than the Earth-Sun distance) with an orbital period of about 1.1 Earth years.