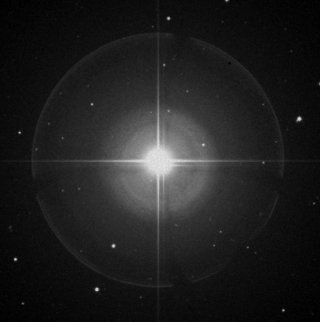 Cor Caroli (Alpha2 Canum Venaticorum) is the brightest star in Canes Venatici; its name, meaning "Charles' Heart," was given in honor of England's King Charles II. In a telescope it is paired with a fainter fifth magnitude star of little interest – the fainter called Alpha1, the brighter, really Cor Caroli itself, Alpha2. Most interestingly, Cor Caroli is a magnetic star, and has one of the strongest known magnetic fields among otherwise normal main sequence stars. The Sun has an overall magnetic field that is only a few times stronger than Earth's; Cor Caroli's, on the other hand, has one that is 1,500 times stronger. The star also has a weird chemical composition in which elements such as silicon and mercury, and rarer ones such as europium, are locally enormously enhanced. Astronomers think the magnetic field is responsible for helping to redistribute the elements in the star's atmosphere, apparently enriching some, depleting others. Cor Caroli is the prototype Alpha2 Canum Venaticorum star.