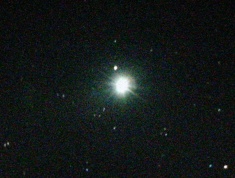 Shedar (Alpha Cassiopeiae) is an orange giant K star and normally the brightest star in the constellation Cassiopeiae, although it is occasionally well surpassed by the strange variable Gamma Cassiopeiae. Its name (also spelled Schedar, Shadar, or Shedir) comes from the Arabic for "breast," and refers to the position of the star in the ancient Queen.

Along with Hamal in Aries, Shedar has the distinction of being one of the first two stars beyond the Sun whose limb darkening has been directly observed. Though only 100 to 200 million years old, it has already left the main sequence, having ceased core hydrogen fusion. Shedar also hides a mystery because various nineteenth-century astronomers claimed it could fade to mid-third magnitude. It is still called a variable in most listings despite the fact that since the advent of permanent photographic and electronic recording, it has shone steadily.