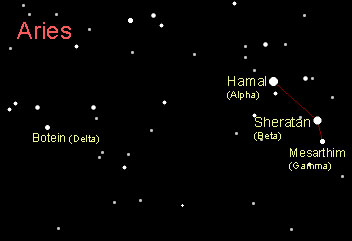 `The location of Hamal in Aries.

Hamal (Alpha Arietis) is easily the brightest star in the constellation Aries and is an orange giant K star. Its Arabic name, meaning "the lamb," stands for the whole constellation of the Ram. Hamal had the distinction, at least up until a few years ago, of having, along with Shedar (Alpha Cassiopeiae), the most accurately-measured angular diameter – 0.00680" (the width of a cent coin seen from 60 km away). This precise measurement also enabled Hamal to become one of the few stars for which limb darkening has been detected.