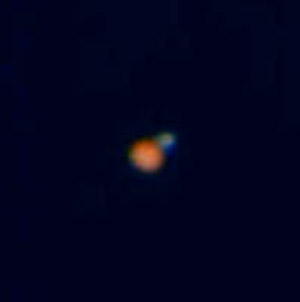 Almaak (Gamma Andromedae) is the third brightest star in the constellation Andromeda and one of the most beautiful double stars in the sky. Its Arabic name (also written as Almach, Almak, Alamak, and Alamaak) has nothing to do with the legend of Andromeda but refers instead to a kind of middle-eastern wild cat.

Even a small telescope shows a superb pair separated by 9.7": the brighter component golden yellow, its partner blue. The second magnitude primary, Gamma1, is a bright giant K star with a surface temperature of about 4,500 K, a luminosity of about 2,000 times that of the Sun, and a radius of 80 times that of the Sun – big enough to swallow the orbit of Venus. Its fainter blue-green companion, Gamma2, is also double, though the dual nature is far more difficult to see. The two fifth-magnitude stars orbit each other with a period of about 60 years and, though they are now near their greatest separation, they are still only 0.5" apart, making them almost impossible to see singly. The brighter of these two is itself a spectroscopic binary with a period of 2.7 days. The three components of Gamma2 are all hot main sequence stars with temperatures around 10,000 K.