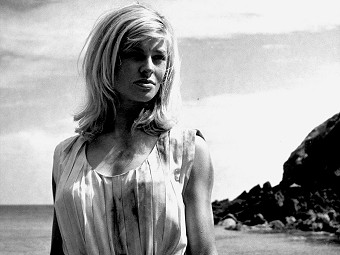 Julie Christie in the starring role as Andromeda.

A For Andromeda was a BBC television science fiction series, written by cosmologist Fred Hoyle and author and TV producer John Elliot. It was broadcast in seven parts in 1961 and published as a novel the following year.1

A For Andromeda was inspired by seminal developments in SETI and the construction of the first giant radio telescope at Jodrell Bank; it aired in the year following Project Ozma.

The story begins with the accidental discovery of an extraterrestrial signal containing a complex message in binary (mathematics, as a universal language) – instructions, as it turns out, for making an immensely powerful computer. A similar theme was explored later by James Gunn in The Listeners and Carl Sagan in Contact.

From the cover of the Corgi edition of A For Andromeda:

Far away, from the constellation of Andromeda, came a message ... a program for a giant computer which hadn't even been built. For the scientists it was a major breakthrough in technology; for the politicians it was an opportunity to conquer the world; but nobody realized the true significance of the machine they had helped to create, nor of the beautiful woman who shared its secrets and its power ...