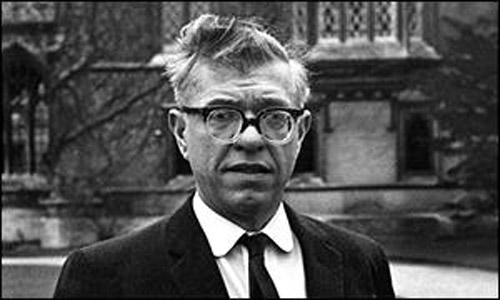 Fred Hoyle was a maverick English astrophysicist and cosmologist, who did important work in nucleosynthesis and championed the steady-state theory of the universe. Educated in mathematics and theoretical physics at Cambridge University, he returned there after wartime work on radar development and remained from 1945 to 1973, with many long-term visits to the California Institute of Technology and the Mount Wilson and Palomar Observatories. He was appointed Plumian Professor of Astronomy and Experimental Philosophy in 1958, and founded Cambridge's Institute of Theoretical Astronomy and served as its first director. His early work on stellar evolution led to his famous collaboration with Margaret and Geoffrey Burbidge and William Fowler on the synthesis of the elements beyond helium in stars. Hoyle successfully predicted the existence of a resonance in carbon-12 that was essential to helium burning in stars. In 1948 Hoyle, Hermann Bondi, and Thomas Gold developed the steady-state cosmological model. Hoyle provided a mathematical theory of the model consistent with the general theory of relativity and served as the leading spokesman for the new theory, coining the term "Big Bang" for the competing model during a radio lecture.

Hoyle was an early supporter of the modern view that extrasolar planets and life are ubiquitous. In his standard text Frontiers of Astronomy1 (1955) he writes:

[W]e may expect planetary systems to have developed around the majority of stars.... Living creatures must it seems be rather common.

This is a pity, because the supporters of various ideologies after attempting to impress the superior merits of their views on each other (through the aid of fusion bombardment and other massive activities), could proceed to impress themselves on the rest of the Milky Way. Not only this, but the opportunity for tax-collectors would be enormous. With taxes levied on say 250,000,000,000,000,000,000 individuals ... it would be possible to whack up the defence programme for the Milky Way to something like reasonable proportions.

Hoyle made a career out of challenging orthodoxy. However, far more remarkable and contentious than any of his earlier work have been his more recent claims about the origin of life. In association with Chandra Wickramasinghe, he began, in the 1970s, to develop the notion that complex organic materials and even primitive microorganisms evolve in interstellar space (see life, in space). Much criticism and derision was initially directed at this hypothesis; yet, while some aspects of it continue to appear implausible to many, other aspects, including the idea that comets serve as delivery vehicles for prebiotic chemicals, have come to be accepted.

Even in Frontiers, Hoyle's future thesis about the origin of life in space was beginning to take shape:

The physical and chemical requirements must ... have been far more favorable for the building of complex molecules before the Earth was aggregated... The Earth intercepts only a tiny fraction of the ultra-violet light emitted by the Sun ... The energy source was therefore much greater before the planets were aggregated ... Another point in favour of a pre-planetary origin of life appears when we consider in a little more detail how the complex molecules were built up. This requires the addition together of many smaller molecules... If the molecules were dissolved in the sea, for instance, the chance of enough of the right kinds of molecules coming together would be negligible... Bernal has called attention to the necessity for solving this problem of association, and has suggested that favorable conditions would probably occur if the molecules were coated as a film on the surface of a solid particle. Such a condition would undoubtedly best be satisfied ... while the planetary material was still distributed as a swarm of small bodies... There is no suggestion that animals and plants as we know them originated in interplanetary space. But the vital steps on which life is based may have occurred there.

Almost contemporaneously with this firm scientific proposal of life's off-world origin, Hoyle allowed his fertile imagination full rein in his first science fiction novel The Black Cloud (1957), in which an intelligent interstellar cloud arrives in the solar system (see extraterrestrial intelligence, forms of). In a later "alien" story, A for Andromeda and its sequel, he turned to some of the possible consequences of SETI.