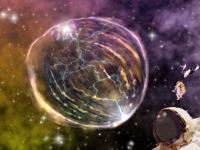 It has been suggested that organisms, simple or complex, might exist in interstellar space. Such life-forms have been the subject of both speculative science and science fiction.

According to a hotly-disputed theory by Fred Hoyle and Chandra Wickramasinghe, first put forward in 1974, life may have originated not on the surface of planets, such as Earth, but in the large interstellar clouds of gas and dust from which stars and their planetary systems form.1, 2, 3 Hoyle and Wickramasinghe believe that molecular clouds, such as those present in the Orion Nebula, are the most natural cradles of life. Inorganic cosmic dust grains, composed of silicate, graphite, and iron particles, mixed with inorganic gases, in their view, act as assembly sites for organic molecules of increasing complexity. The organic molecules become polymerized on the surface of the dust grains, they argue, then as the density of the cloud rises during gravitational collapse these polymer-coated grains collide with increasing frequency, leading to the growth of grain clumps with embedded prebiotic chemicals. Hoyle and Wickramasinghe point out that such clumps would have dimensions of a few microns – similar to the sizes of cells in simple microorganisms. In their opinion, Darwinian-style selection and evolution would take place involving competition between the growth of grain clumps and their division and destruction in the interstellar environment. The simplest self-replicable system, consisting of inorganic grains held together with organic polymer coatings would dominate. Finally, they imagine, given the right conditions, the organic polymer films, which separate individual grains as well as surround entire clumps, could evolve into biological cell membranes. Within each "protocell" all the essential ingredients of life would be present. These proto-cells would then become incorporated into meteorites and comets which would act as delivery systems to bring the interstellar prebiota to the surface of new-formed worlds, such as the infant Earth.

The possibility that even large, complex life-forms could survive and thrive in the voids between stars has been a recurrent theme in science fiction. Hoyle's novel The Black Cloud is perhaps the best known example. On television, the idea has been explored several times in Star Trek, e.g. original series "The Immunity Syndrome" and Next Generation episode "Tin Man."