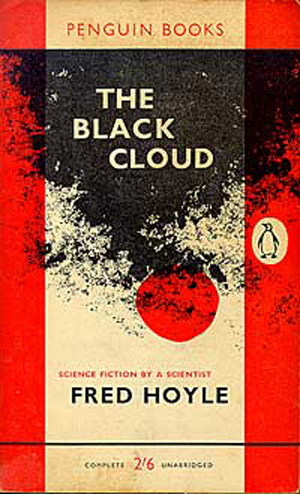 Cosmologist Fred Hoyle ranks among a small but influential group of scientists (which also includes Carl Sagan) who have written works of "alien" fiction that are extrapolated from their basic scientific beliefs. In his novel The Black Cloud (1957),1 Hoyle describes the arrival near the Earth of a small interstellar cloud that can think and move of its own accord. A living organism, half a billion years old, as big as the orbit of Venus, and as massive as Jupiter, the Black Cloud has a "brain" that consists of complex networks of molecules which can be increased in number and specialization as the creature desires (see intelligence, nature of). Once it learns that the third planet of the Sun is inhabited by an intelligent race, it establishes contact and begins to reveal some extraordinary facts about intelligence in the Universe:

[I]t is most unusual to find animals with technical skills inhabiting planets, which are in the nature of extreme outposts of life... Living on the surface of a solid body, you are exposed to a strong gravitational force. This greatly limits the size to which your animals can grow and hence limits the scope of your neurological activity. It forces you to possess muscular structures to promote movements, and ... to carry protective armour ... [Y]our very largest animals have been mostly bone and muscle with very little brain... By and large, one only expects intelligent life to exist in a diffuse gaseous medium... The second unfavourable factor is your extreme lack of basic chemical foods. For the building of chemical foods on a large scale starlight is necessary. Your planet, however, absorbs only a very minute fraction of the light from the Sun. At the moment, I myself am building basic chemicals at about 10,000,000,000 times the rate at which building is occurring on the whole ... surface of your planet.

The Cloud goes on to discuss the evolution of intelligence, the difficulty of communicating an appreciation of arts and the quality of emotions between beings of different neurological structure, how it feeds and reproduces, and other aspects of life as a giant nebular organism.

Could such an interstellar life-form could exist? In the preface to his novel, Hoyle writes that "there is very little here that could not conceivably happen." But one of the potential obstacles to off-world life is that the density of matter between the stars is so low that interactions between particles take place far less frequently than on a planet's surface. Consequently, the evolution of interstellar organisms, if it can occur at all, might take thousands or even millions of times longer than that of terrestrial life – a much longer period than the present age of the universe. On the other hand, perhaps our sole experience of evolution on a planetary surface leaves us ill-equipped to surmise how biological organization might take place under completely different circumstances. It may even be, as Hoyle and his colleague Chandra Wickramasinghe have proposed, that we are wrong in supposing that life was created on the Earth. In an echo of the Black Cloud theme, they theorize that primitive life-forms may have come together on the surface of grains of cosmic dust.

A somewhat similar concept to Hoyle's Black Cloud is the molecular quantum computing cloud proposed by Arvidas Tamulis and co-authors.