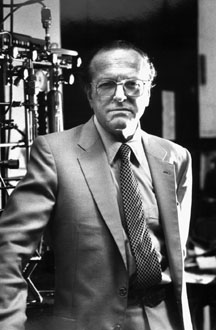 Thomas Gold was an Austrian-born American astrophysicist who, in 1948, together with Hermann Bondi and Fred Hoyle, proposed the steady-state theory of the universe. In the late 1960s he correctly interpreted the newly-discovered pulsars in terms of rotating neutron stars (a proposal made independently by Franco Pacini).

Among Gold's many other original and frequently unorthodox ideas was his garbage theory of the origin of life.1 He suggested that biological contaminants accidentally left behind by interstellar survey parties could introduce life to a previously sterile or prebiotic world. He envisaged a group of extraterrestrial visitors having a picnic somewhere on the young Earth. What if they dropped a few crumbs of food and from the microbes in those crumbs we eventually evolved?

Gold also put forward the highly controversial proposal, known as the deep, hot biosphere hypothesis,2 that petroleum deposits formed non-biologically at great depths. This hypothesis would explain, Gold believed, the surprisingly high concentration of helium found in petroleum since as the liquid rose to the surface it would collect helium from the many kilometers of rock through which it percolated. A few km underground, as Gold saw it, the upwelling petroleum acts as a nutrient for deep-dwelling microorganisms that are the source of the biological molecules found in crude oil. Gold argued that a number of planets, moons, and even asteroids in the Solar System might have internal hydrocarbon reserves, which could provide an energy source for subterranean microbes. Titan, in particular, which has methane and ethane in its atmosphere, he considers a promising place to look for subsurface life.

Born in Vienna, Gold became a refugee from the Austrian Anschluss and gained his BA in 1942 from Cambridge University, England. He lectured there in physics from 1948 to 1952 before joining the Royal Greenwich Observatory as chief assistant to the Astronomer Royal. He moved to the United States in 1956, founding the Center for Radiophysics and Space Research at Cornell University and serving as its first director from 1959 to 1981, and as professor of astronomy from 1971 to 1986. He was also on the EASTEX committee.