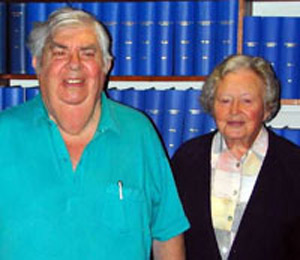 Margaret and Geoffrey were British-born wife and husband astrophysicists, who were based in the United States for many years. Margaret was educated at the University of London, where she remained until 1951. She was director of the Royal Greenwich Observatory, worked at Yerkes Observatory and the California Institute of Technology, and was at the University of California, San Diego, from 1962, becoming the first director of its Center for Astrophysics and Space Sciences. In 1957 she, husband Geoffrey Burbidge, William Fowler, and Fred Hoyle showed how all of the elements except the very lightest are produced by nuclear reactions in stellar interiors (see nucleosynthesis). She was also well known for her spectroscopic studies of quasars and played a major role in developing instrumentation for the Hubble Space Telescope.

Geoffrey Burbidge was educated at the Universities of Bristol and London, where he earned his PhD in theoretical physics in 1951. He said that he got into astronomy by marrying an astronomer. He worked at Cambridge University, the California Institute of Technology, and Yerkes Observatory, and was at the University of California, San Diego from 1962, aside from six years as director of the Kitt Peak National Observatory. He did research into the physics of non-thermal radiation processes, and the structures and masses of galaxies and quasars.