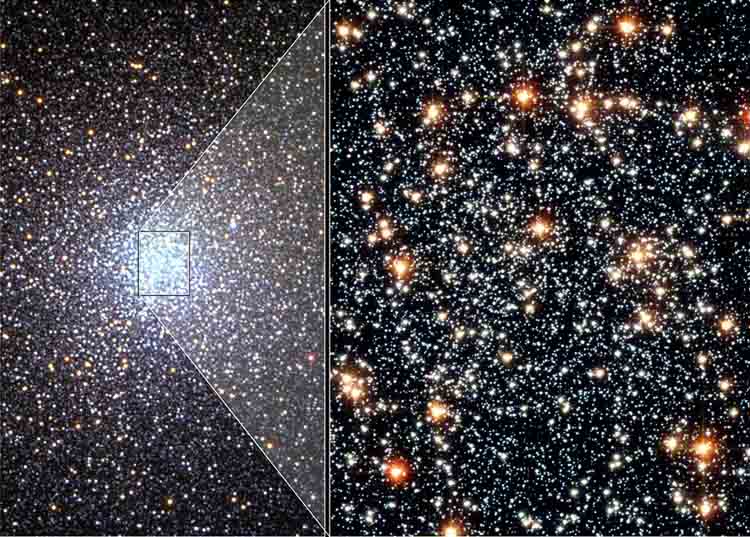 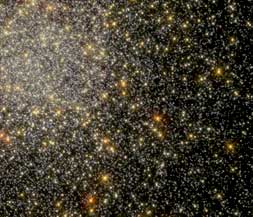 Hubble Space Telescope image of stars near the center of 47 Tuc.

47 Tucanae is the second brightest globular cluster in the sky, after Omega Centauri. To the unaided eye it looks like a misty star lying close to the Small Magellanic Cloud. Binoculars clearly show an increase in brightness toward the center and a telescope with an aperture of at least 10 cm resolves some of the roughly one million member stars. Although a conspicuous naked-eye sight, 47 Tucanae (NGC 104) lies so far south, in the constellation Tucana, that it wasn't discovered by astronomers until 1751 when Nicholas de Lacaille catalogued it in his list of southern nebulous objects having initially believed it to have been a comet.

A search for Jupiter-like planets in 47 Tuc, carried out by an international team of astronomers using data from the Hubble Space Telescope, came up empty-handed. The work involved checking 34,000 stars in the cluster for signs of large transiting planets. The absence of any positive results strengthens the argument that planets are rare or nonexistent in globular clusters because of the very low concentration of heavy elements.

Recent observations have shown that 47 Tuc's white dwarf stars are in the process of being gravitationally expelled to the outer parts of the cluster due to their relatively low mass. About 25 millisecond pulsars have been discovered in the core of the cluster.