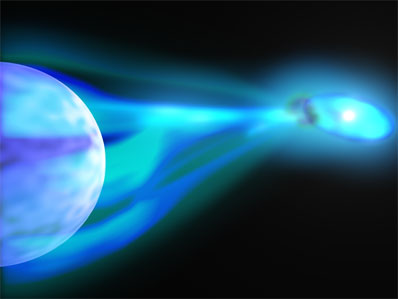 An X-ray binary is an X-ray emitting binary star that consists of a neutron star or, rarely a black hole, and a normal stellar companion. The X-rays come from matter, taken from the normal star, that has entered an accretion disk around the compact object and become heated to millions of degrees.

X-ray binaries are classified according to the nature of the companion to the compact object. If its mass is similar to, or not much greater than, that of the Sun, as in the case of Scorpius X-1, it is known as a low-mass X-ray binary (LMXB). If the mass of the companion is greater than about 10 solar masses, as in the case of Cygnus X-1, it is called a high mass X-ray binary (HMXB). Systems in which the companion has an intermediate mass are very rare. Binaries containing a white dwarf and a low-mass companion aren't referred to as X-ray binaries even though they are X-ray sources. Instead, they are classified as cataclysmic binaries, because they show very large variations in their brightness, such as nova events, and are weaker X-ray sources than binaries containing neutron stars or black hole candidates. No X-ray source containing a white dwarf and a massive star is known.