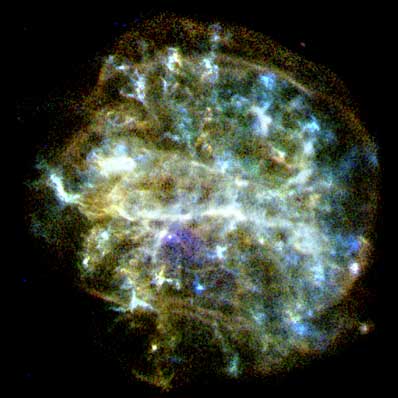 Supernova remnant G292.0+1.8. This is a young, oxygen-rich supernova remnant with a pulsar at its center surrounded by outflowing material. It is shown here imaged in X-rays by the Chandra X-ray Observatory. With an age estimated at 1,600 yr and a diameter of 36 light-years, G292.0+1.8 is one of three known oxygen-rich supernovae in our Galaxy. These objects are of great interest to astronomers because they are one of the primary sources of the heavy elements necessary to form planets. Credit: NASA/CSX/Rutgers/J. Hughes et al. 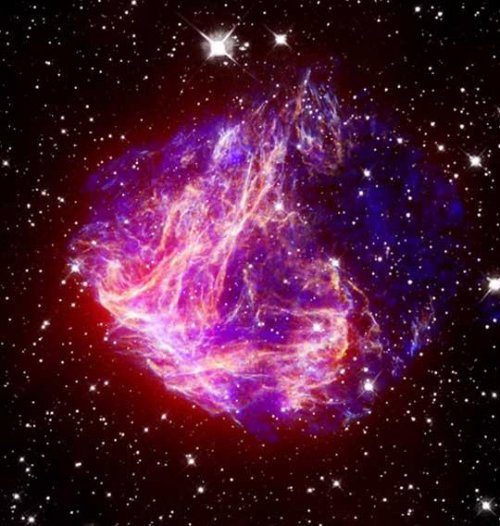 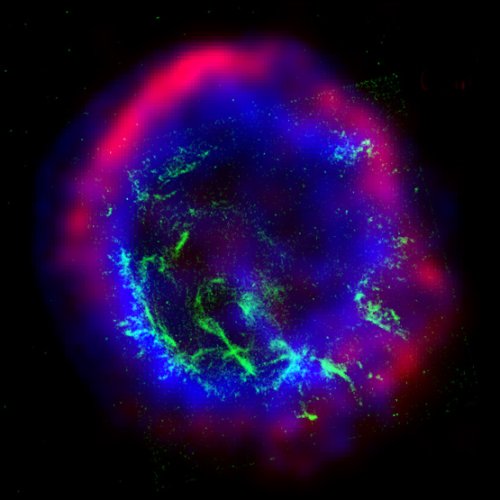 Color-composite image of E0102-72.3 – a supernova remnant in the Small Magellanic Cloud. The Chandra X-ray image (blue) shows gas that has been heated to millions of degrees Celsius by a shock wave moving into matter ejected by the supernova. The radio image (red) made with the Australia Telescope Compact Array, traces the outward motion of a shock wave due to the motion of high energy electrons. The optical image (green) made with the Hubble Space Telescope, shows dense clumps of oxygen gas that have cooled to about 30,000°C. 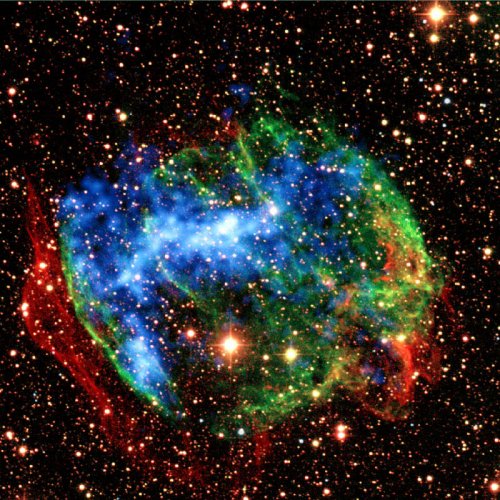 A supernova remnant is an expanding diffuse nebula that consists of material ejected at speeds of about 10,000 km/s by a supernova together with swept-up interstellar matter. Supernova remnants are generally powerful radio and X-ray sources, and may or may not be visible at optical wavelengths.

There are several different types of supernova remnants:

Supernova remnants (SNR) tend to involve three main phases. During the first, known as free expansion, the front of the expansion is formed from the shock wave interacting with the ambient interstellar medium (ISM). This phase is characterized by constant temperature within the SNR and constant expansion velocity of the shell. In the second phase, known as the Sedov or adiabatic phase, the SNR material slowly begins to decelerate and cool. The main shell of the SNR experiences Rayleigh-Taylor instability, which causes the SNR's ejecta to become mixed with the gas that was just shocked by the initial shock wave. This mixing also enhances the magnetic field inside the SNR shell. The third phase, known as the snowplow or radiative phase, begins after the shell has cooled to about 106 K, so the shell can more efficiently radiate energy. This, in turn, cools the shell faster, making it shrink and become more dense, which cools it faster still. Because of the snowplow effect, the SNR quickly develops a thin shell and radiates away most of its energy as optical light. Outward expansion stops, the SNR starts to collapse under its own gravity, and, after millions of years, the remnant is absorbed into the ISM.