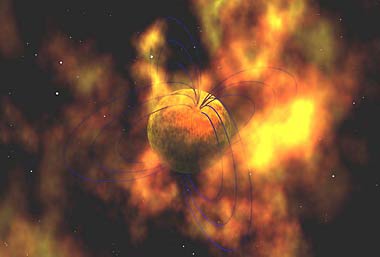 This depiction of a magnetar shows the superstrong magnetic field lines (blue) and surrounding hot gas. According to one theory, these magnetic field lines periodically get twisted when the star's crust shifts. As the field lines untwist and reconnect they blast out a storm of particles that annihilate one another and produce a split-second flash of X-rays and gamma rays, which we see as soft gamma repeater flares. (Image courtesy Dr. Robert Mallozzi / University of Alabama in Huntsville / Marshall Space Flight Center).

A magnetar is a neutron star with a fantastically strong magnetic field, of the order of 1011 tesla – about a thousand trillion times stronger than Earth's, 100 to 1,000 times stronger than the field of a radio pulsar (the normal observed form of neutron star), and perhaps stronger than any other magnetic field in the universe. Such an object would be off-limits to humans: because a magnetar acts as a colossal electromagnetic generator, a person in a spacecraft floating nearby would feel 100 trillion volts between his head and feet!

Magnetars are the only objects in space powered mainly by magnetism and are now considered to be the most likely explanation for soft gamma repeaters (SGRs) and anomalous X-ray pulsars (AXPs). Their existence was first theorized in the late 1980s by the American astronomer Robert Duncan and the Canadian astronomer Christopher Thompson, who concluded that, in principal, neutron stars could be formed with magnetic fields that were very much stronger than those seen in familiar pulsars. Such an intense field, they reasoned, would put the star's surface under enormous stress, perhaps triggering starquakes and leading to intense bursts of high-energy radiation. In 1992, they used their magnetar theory to explain an enormously powerful gamma-ray burst detected on Mar 5, 1979, and later identified with a young supernova remnant, N49, in the Large Magellanic Cloud and, later still, recognized as the first-recorded SGR. In 2002, Brian Kern and Chris Martin of the California Institute of Technology showed that the magnetar theory is the only reasonable explanation for the behavior of 4U0142+61, a faint object in Cassiopeia. In an ordinary pulsar, the optical pulsations are a diluted by-product of the X-ray pulsars and are therefore relatively weaker. But in the case of 4U0142+61, a quarter of the pulsed output is visible light compared with only a 3% contribution from X-rays – exactly the behavior expected of a magnetar.