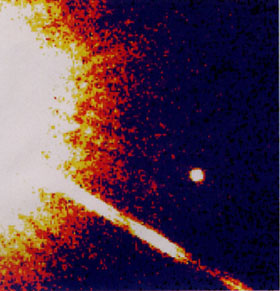 Gliese 229B was the first confirmed brown dwarf. It is in orbit around the nearby red dwarf, Gliese 229, in the constellation of Lepus.

Gliese 229B was discovered in 1994 by a team of astronomers from Caltech and Johns Hopkins University using the 60-in reflector at Palomar Observatory equipped with an adaptive optics coronograph, an image-sharpening device developed at Johns Hopkins. Further imaging was performed using the Hubble Space Telescope and an infrared spectrum was obtained using the Palomar 200-in. This spectrum showed strong absorption lines due to methane, strikingly similar to those found in the spectrum of Jupiter's atmosphere. Since methane can only exist at temperatures less than 1,200 K and the coolest stars have a surface temperature of 1,800 K, this is conclusive evidence that Gliese 229B is not a star. There remains, however, a possibility that it may be a very massive planet. The decisive factor is how GL 229B formed. If it condensed like a star from an interstellar cloud then it is certainly a brown dwarf. On the other hand, if it grew by accretion in a circumstellar disk, then some astronomers would argue that it is a large planet. If the former is the case, then it is likely to have a much more elongated orbit (like that of most binary stars) than if it were planetary in nature. This determination may take a number of years, however, since GL 229B is in a wide orbit around its primary, similar in size to the orbit of Pluto around the Sun.