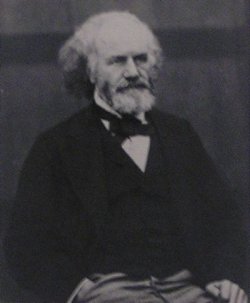 Jules Janssen was a French astronomer, born in Paris, who discovered some new spectral lines in the spectrum of Sun in 1868. This led him to propose the existence of a new chemical element, later named helium. Janssen was the first to note the granular appearance of the Sun, and published a monumental solar atlas in 1904 including 6,000 photographs.

An accident at a young age left Janssen unable to walk, which prevented him from attending school. He began working as a bank clerk at age 16, and began studying mathematics in his spare time. He eventually entered the Sorbonne, graduating in 1852 with degrees in mathematics and physical sciences, and obtaining his doctorate in 1860. Remaining at the Paris university, he first worked at the faculty of medicine on the design of medical instruments, then became professor of Physics at the school of architecture. He was elected to the Académie des Sciences in 1868, and in 1876 took the helm of the newly founded Observatoire de Meudon (near Paris), a position he held until his death.

In 1862, impressed and fascinated by the spectroscopic work of Gustav Kirchhoff and Robert Bunsen, Janssen began his studies of the solar spectrum. His first important contribution was to demonstrate that some of the dark lines observed in the solar spectrum were caused by water vapor in the Earth's atmosphere. He made lasting contributions in solar spectroscopy, in particular in the observation of solar prominences. Following his observations of the 1868 solar eclipse in India, he suggested that some of the unknown spectral lines observed above the solar limb were due to a hitherto unknown chemical element. J. Norman Lockyer independently and simultaneously arrived at the same conclusion, and both men are now credited with the discovery of helium.

Janssen never let his infirmity get in his way. He traveled to the summits of the Mont Blanc in the French Alps, and to the Faulhorn in the Bernese Oberland, to carry out spectroscopic observations above the bulk of the Earth's atmosphere. He also made extensive use of hot air balloons for the same purpose, including a particularly daring flight to escape the 1870 siege of Paris during the Franco-Prussian war, and to observe a solar eclipse on December 22 at Oran, Algeria (which he finally could not observe because of bad weather!).

Janssen was also an early pioneer in the use of photography in solar physics. His extensive series of photographs of the solar surface were published in 1904 in his Atlas de Photographies Solaires. This work established the standards of solar photography, and the quality of Janssen's solar photographs was to remain unsurpassed for nearly half a century.