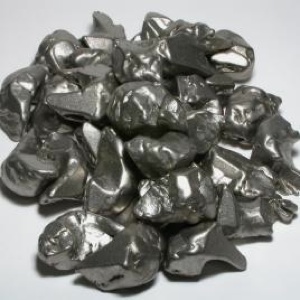 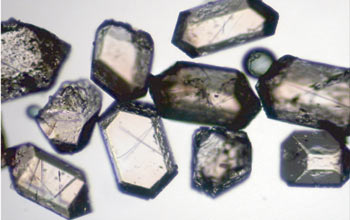 Zirconium (Zr) is a silvery-white, metallic element in group IVB of the periodic table. It is also a transition element. Zirconium was discovered in 1789 by Martin Klaproth in Berlin; its name comes from the Arabic zargun meaning "gold color."

Zirconium occurs naturally as zircon (ZrSiO4), baddeleyite (ZrO2), and some 30 other mineral species. Naturally occurring zirconium contains five isotope (the commonest being 90Zr, 51.46%); fifteen other isotopes are known to exist. Zirconium is extracted by reducing zirconium (IV) chloride with magnesium (the Kroll process).

It is chemically similar to titanium, and is corrosion-resistant at ordinary temperatures, owing to an inert oxide layer, but reactive at high temperatures.

Zirconium is used in photographic flash bulbs, to clad uranium fuel elements in nuclear reactors, and to make surgical implants, including tooth implants. The refractory oxide is used for ceramics, and other zirconium compounds are used in pharmaceuticals and as mordants in dyeing.

Zircon is a hard silicate mineral (ZrSiO4) and a major ore of zirconium of widespread occurrence. Zircon forms prismatic crystals in the tetragonal system, which when transparent are used as gems. They may be colorless, red, orange, yellow, green, or blue, and have a high refractive index.

Zirconium is found in abundance in S stars, and has been identified in the Sun and meteorites. Analysis of lunar rock samples obtained during the various Apollo missions to the Moon show a surprisingly high zirconium oxide content, compared with terrestrial rocks.