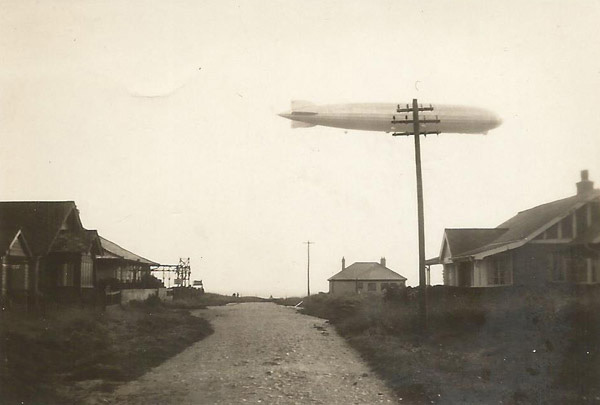 Fig 1. The Graf Zeppelin flying over Peacehaven on the south coast of England, sometime in the 1930s. This immense airship was 775 ft long and, at full complement, had a crew of 40 and 20 passengers, travelling in luxury.

Fig 3. Non-rigid airships have flexible envelopes that are stabilized by being inflated to a pressure slightly higher than that of the surrounding atmosphere. The load is suspended by a system of ropes or wires that distributes the eight around the fabric envelope. Semi-rigid airships are uncommon but the Norge was one of a series of Italian airships of the 1920s and achieved fame by making a voyager to the North Pole in 1926. There was no rigid structure inside the gas envelope, but a rigid keel ran from bow to stern and served as a structure to which everything could be attached. Cords and cables extended upward from the keel to secure the envelope, preserve its shape, and enable it to lift the whole ship. Rigid airships have a skeleton framework that contains the lifting gas in a series of bags.

An airship is a lighter-than-air, self-propelled aircraft whose buoyancy is provided by gas bags containing hydrogen or helium.

The airship evolved from the spherical balloon first successfully flown by the Montgolfier brothers in 1783. Airships are basically large, controllable balloons that have an engine for propulsion, use rudders and elevator flaps for steering, and carry passengers in a gondola suspended under the balloon.

The first successful airship was designed by Henri Giffard, a French engineer, and flew over Paris in 1852. Like all early efforts at building airships, it involved stretching a round balloon into an egg shape that was kept inflated by internal air pressure. Such non-rigid airships, commonly called blimps, used ballonets – air bags located inside the outer envelope that expanded or contracted to compensate for changes in the gas. Because these blimps often collapsed under stress, designers added a fixed keel under the envelope to give it strength or enclosed the gas bag inside a frame. These semi-rigid airships were often used for reconnaissance flights.

The rigid airship was the most useful type of airship. A rigid airship has an internal framework of steel or aluminum girders that supports the outside material and gives it shape. Only this type of airship could reach sizes that made it useful for carrying passengers and cargo.

From 1900 Germany led the world in airship design, as Count Ferdinand von Zeppelin (1838–1917) began to construct his famous "Zeppelins" (Fig 1). Most of the large airships of the next 40 years were of the rigid type, with a metal-lattice frame, and used hydrogen as the lifting gas. Their vulnerability in storms and a series of spectacular fire disasters brought an abrupt end to their use in about 1937.

During World War II much use was made of small non-rigid airships, or blimps, in which the gas bag formed the outer skin and altitude was controlled by inflating and venting air ballonets inside the main gas bag. Most present-day airships are of this type, with engine slung beneath the gas bag either on the cabin or in separate nacelles.