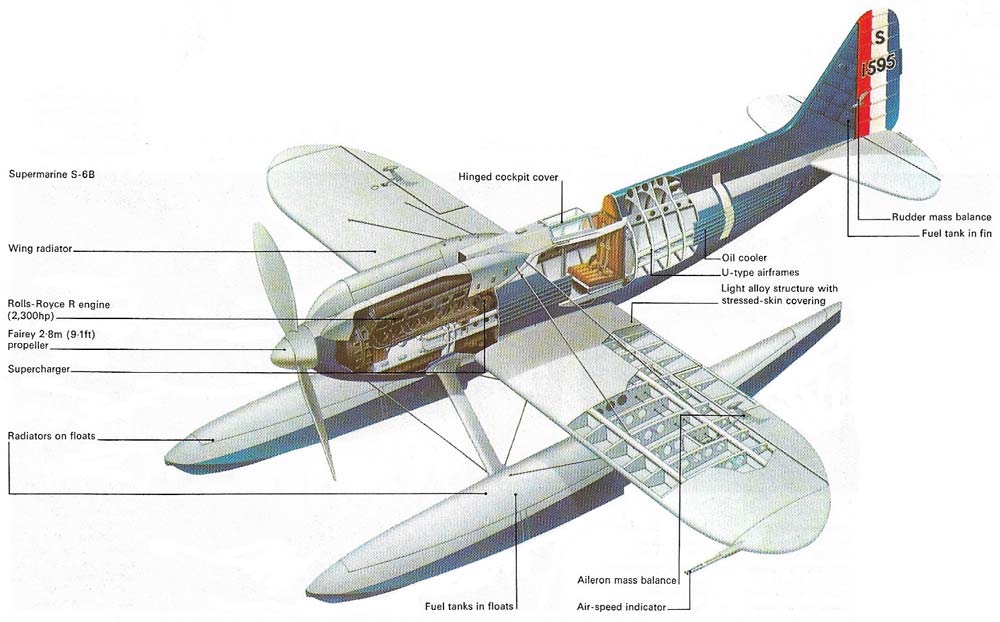 Fig 1. The focus of aeronautical interest between the world wars was the Schneider Trophy race for seaplanes. Competing soon became so costly that only national (i.e. air force) teams were able to take part. The 1931 race was won by the British S-6B, which influenced design of the Spitfire, but the Macchi MC72 would probably have won if it had been ready in time. In 1934 the Macchi improved on the world speed record it had set the previous year with a speed almost 710 km/h (441 mph).

Fig 2. Louis Blériot flew his first aircraft in 1907, but it was with the Type XI that he achieved his greatest success. Aided by a shower of rain which saved his engine from overheating, he flew from Les Barraques in France to Dover, England. His flight was the first sea crossing and the first international air journey. Within two days of this feat, Blériot had received orders for more than 100 Type XI aircraft. 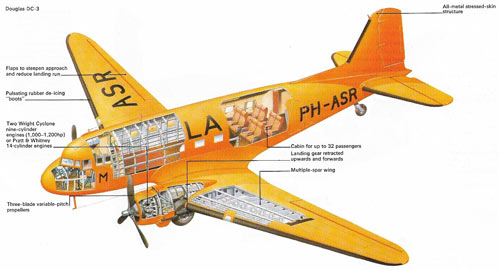 Fig 3. The Douglas aircraft of the 1930s incorporated many new developments. The DC-1, which first flew on 1 July 1933, had a smooth stressed-skin structure, retractable landing gear, flaps, variable-pitch propellers, and a streamlined shape. It was followed by the faster DC-2 and the larger and even faster DC-3, which took to the air in December 1935. By far the most widely used transport in history, 10,926 of these cheap, reliable planes were built. 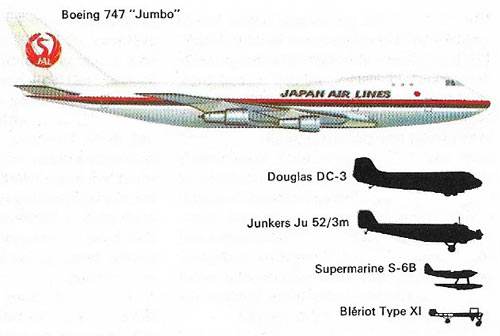 Fig 4. The frailty and small size of early aircraft is emphasized by the comparison of their silhouettes with that of a Jumbo Jet. This growth has, to some extent, been forced and made possible by huge improvements in propulsion and in airfields. Even the Ju 52/3m and DC-3 had to operate from small, rough grass fields. These planes represented the most efficient compromise between conflicting demands that were possible in the 1930s. 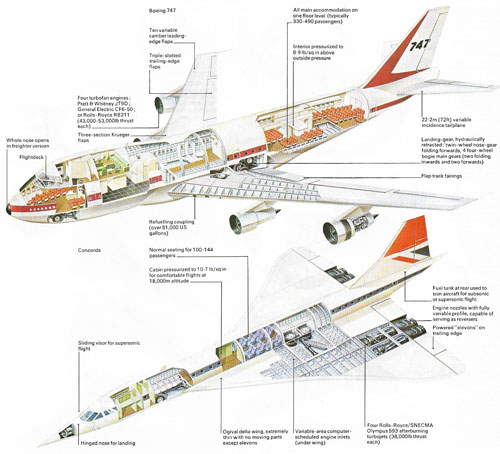 Fig 5. The Boeing 747, first flown in 1969, was the largest civil airliner. With its turbofan engines, it heralded a new era of quiet flight. The 747 was developed because of the need to move more traffic without increasing congestion. The Anglo-French Concorde represented another step in fast passenger transport. These aircraft halved the time previously taken to fly between any two distant places, just as the Comet did in 1952.

Leonardo da Vinci was the first person to attempt the scientific design of flying machines. But in his time no motor was available which was powerful enough to lift a person into the air. The first human ascents from the ground had to await the late eighteenth century and the invention of the Montgolfier brothers' hot-air balloon and Jacques Charles' hydrogen balloon (1783). The addition of steam engines to the balloon gave the first maneuverable airship (1852). Meanwhile George Cayley designed and built the first flying gliders (1810–1853) and William Henson designed a steam-powered model airplane with twin propellers (1842). It was not until the advent of the gasoline internal-combustion engine, though, that the powered heavier-than-air machine became a practical possibility. The first successful controlled airplane flight was made by the Wright brothers near Kitty Hawk, North Carolina, on December 17, 1903 and within a few years there were many competing manufacturers and fliers of airplanes.

Airplane technology was greatly stimulated by World War I and after 1919 commercial aviation developed rapidly. Meanwhile, the autogyro was invented by Juan de la Cierva (1923), to be followed by Sikorsky's helicopter (1939). Jet propulsion (see jet engine) was developed in several countries during World War II and by the mid-1950s had come to be used in the majority of military and commercial airplanes. Radar navigation systems came into use in this period.

After the Wright brothers one of the important contributors to aeroplane design was Louis Bleriot (1872–1936). He introduced a number of new features in his design, including a tractor (pulling) propeller, single wing (monoplane) and rudder and elevator at the rear. His Type XI (Fig 2) achieved world acclaim on 25 July 1909 by flying from France to England. As with almost all other flying machines of its day it was of mixed construction; the main spars of the stubby wing and the four longerons of the lengthy fuselage were made of ash and the whole structure braced by numerous wires. Like the Wrights, Bleriot covered both the top and bottom surfaces of his wings, although many other designer-aviators used only a single surface of fabric, stretched over the top of the wing.

By 1912 Deperdussin, helped by research in Scandinavia, had built a racer of monocoque (single-shell) construction, which made for strength, lightness and a completely new streamlined form. He built his fuselage from multiple thin veneers of tulip wood, wrapped to shape and finally glued and covered with doped (lacquered) fabric. Most of the 100,000 aircraft built in World War I used the traditional wire-braced wood structure, but then the monocoque design developed gradually and found new expression in metal. Some early military aircraft, such as the Voisin L series, had all-metal structures. Some were made of steel tubing assembled by welding, riveting or with bolted joints, and others used the new aluminium alloy Duralumin. Whatever the material, the basic method was to make a strong skeleton and cover it with fabric.

A few wartime machines designed by Hugo Junkers (1859–1935) were not only all-metal in skeleton but were also skinned with metal. In 1919 Junkers flew his F13, the first all-metal monoplane in commercial service. The low-mounted wing was completely unbraced by struts or wires and, like the fuselage, was skinned with Duralumin sheets having fore-and-aft corrugations for rigidity. From this stemmed a family of transports used all over the world, the best known being the Ju 52/3m – the leading European airliner in the 1930s and an aircraft built in large numbers for Hitler's Luftwaffe.

The only other family of transports able to rival the Junkers all-metal monoplanes were those from the Dutch Fokker company. These were also monoplanes, but they had deep wooden wings mounted above the fuselage of welded steel tube with a fabric covering. Together these two companies dominated Europe until the mid-1930s.

Throughout the 1920s, much attention and money was lavished on the Schneider Trophy – an international competition for racing seaplanes. Seaplanes rather than conventional aircraft took part because Jacques Schneider thought that future international airline operators would make wide use of waterborne aircraft (Fig 1).

In addition to the public interest it stimulated, the competition had great influence on the mainstream of aircraft design. Also significant was the steady improvement in aviation technology, especially in the United States. The most important factor was the perfection of all-metal stressed-skin construction, in which the light-alloy skin was not just a covering but a crucial load-bearing part of the structure (so permitting a lighter skeleton underneath). Engines were improved and installed in better ways, with cowlings giving reliable cooling and reduced drag. Propellers were no longer fixed blades of wood or metal, but consisted of hub mechanisms carrying blades whose pitch (setting to the airflow) could be varied to suit the different demands of take-off and high-speed flight. Wings were fitted with flaps to give more lift at take-off and both lift and drag for landing. Landing gears were made retractable to reduce drag. Inevitably, aircraft acquired "systems" worked by electricity, hydraulics, compressed air, and other methods, which grew ever more complex.

One of the first modern airliners was the Boeing 247 of 1933. In the same year Douglas flew the DC-1, only one of which was built, and took orders for the slightly improved DC-2. In 1934 Britain held an air race to Melbourne, Australia; the outright winner for speed was a special racer, carrying no load, but the second and third places were taken by a DC-2 and a Boeing 247. On 17 December 1935, the thirty-second anniversary of the Wrights' first flight, Douglas flew the DC-3 (Fig 3). Over the next ten years this was to become the world standard airliner and the standard Allied transport in World War II, with some 11,000 being built in the United States and the Soviet Union. Large numbers are still in use and individual DC-3s have flown as many as 80,000 hours. Previously, few aircraft flew for more than 1,000 hours without either being wrecked or suffering from severe structural fatigue.


The arrival of Comet I

When the British Comet I came into service in 1952, most airlines thought it premature and continued buying piston-engined machines for a while. But new jet aircraft offered the passenger a wholly new experience – flight that was not only faster but also significantly smoother and more comfortable. The early jets were, however, not so impressive to someone on the ground although they stimulated unprecedented and sustained growth and profitability for the airlines; they were outwardly extremely noisy and burned fuel rapidly.

An answer to such problems was the large-diameter turbofan, a cross between a turbojet and a turboprop. Although the principle had been known since the early work of Frank Whittle (1907–1996 ), the inventor of the first British jet engine, and in 1947 Metropolitan Vickers had built such an engine – the F3 – aircraft of the period were not capable of carrying it. The large-diameter turbofan was rediscovered during the development of a US Air Force freighter in the mid-1960s. The losing bidder for that contract, Boeing, took four of the giant, yet quiet engines and used them to propel the Boeing 747, the first of the huge wide-body transports, popularly known as the "Jumbo".