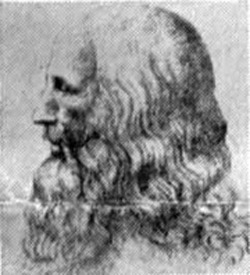 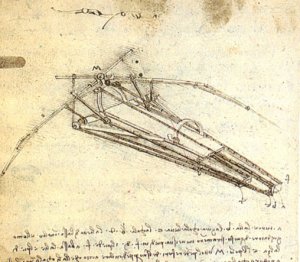 Leonardo's drawing of an ornithopter.

Leonardo da Vinci was an Italian Renaissance painter, sculptor, architect, engineer, and naturalist. The immense scope of his accomplishments was the impetus for the term "Renaissance Man," becoming part of everyday language. His achievements and interests spanned the arts and sciences to an extent unequalled in known history.

Leonardo was born on Apr 15, 1452, near the town of Vinci, close to Florence, Italy. He became an apprentice to Andrea Verrocchio, a Renaissance master, when he was only 17 years old and began his artistic career.

His innovations in the field of painting influenced Italian art for more than a century after his death. Among his most well known works are the Adoration of the Magi, Leda and the Swan, the Mona Lisa, and The Last Supper. As was common at the time, most of his paintings had religious themes.

Leonardo also developed an intense interest in non-artistic subjects. He worked as a civil and military engineer and map maker for Cesare Borgia, where he applied his growing knowledge of mechanics.

He immersed himself in fields as diverse as anatomy, biology, mathematics, and physics. His scientific studies – particularly in the fields of anatomy, optics, and hydraulics – anticipated many of the developments of modern science. His scientific theories, like his artistic innovations, were based on careful observation and precise documentation, and he understood the importance of precision in science. His interest in anatomy led him to perform dissections, and he studied blood circulation and the action of the eye. He systematically studied the flight of birds, which he applied in his drawings and discussions of ornithopters and other flying crafts. His flying devices, although impracticable, embodied sound principles of aerodynamics.

Leonardo made discoveries in meteorology and geology, learned the effect of the Moon on the tides, foreshadowed modern theories of the formation of continents, and deduced the nature of fossil shells. He was among the originators of the science of hydraulics and probably devised the hydrometer. He invented a large number of potentially useful and ingenious machines and devices, among them an underwater diving suit.

Unfortunately, many of his scientific projects and treatises were never completed. He recorded his technical notes and sketches in numerous notebooks that made up the Codex Atlanticus. But his practice of using mirror script (his writing had to be read in a mirror to be deciphered) contributed to his discoveries and observations remaining unread and undisseminated for centuries after his death.