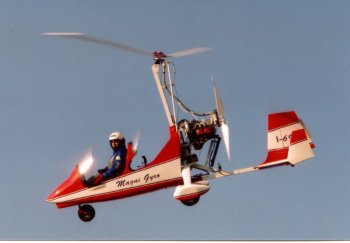 An autogyro is a rotary-wing aircraft that uses a propeller for forward motion and a freely rotating, unmotorized rotor for lift. The Spanish aeronautical engineer Juan de la Cierva invented it in the early 1920s.

The rotor looks like a propeller with three or four very long blades. This rotor mounted is mounted above the fuselage at the top or a vertical shaft. The blades of the rotor spin horizontally around the shaft, making the autogyro resemble a windmill that is lying on its side.

The autogyro differs from the helicopter in that the engine does not continuously move the rotor, as the engine on a helicopter does. The engine is connected to the prerotator and is engaged only before takeoff. The small propeller at the front of the machine is vertical to the fuselage and pulls the autogyro forward as the propeller on an aircraft does. The forward motion causes the rotor to turn automatically.

Like an airplane, the autogyro must move along the ground before lifting off. The engine drives the rotor blades at a high rate of speed before the machine can leave the ground. Once in the air, the rotors are disconnected from the engine. The blades continue to revolve because of the air pressure against the bottom of the blades. These revolutions create sufficient lift to keep the autogyro aloft. This phenomenon is called autorotation.

As the rotor turns, each blade moves forward on one side of the aircraft and backward on the other, thus creating more lift on the advancing side. Cierva joined each blade separately to the hub of the rotor so that each blade could rise automatically to avoid producing too much lift or could fall automatically to avoid producing insufficient lift. His autogyro was difficult to maneuver at low speeds because it used airplane-like controls that were dependant on forward speed to work. Later machines had the wings removed and were controlled by a tilting main rotor. An aircraft that is equipped this way can be directly controlled by varying the pitch or speed of the rotor blades or by tilting the rotors. Thus, it does not need conventional rudders, elevators, or ailerons. No autogyro has ever had a tail rotor.

The autogyro can climb or descend very steeply and descend vertically. However, it cannot climb vertically or hover over one spot like a helicopter.