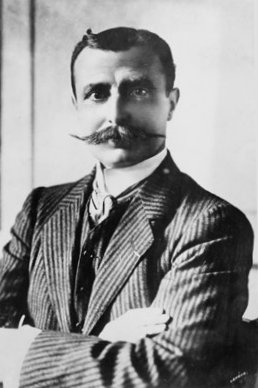 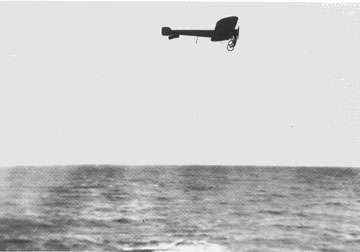 Louis Blériot was a French inventor, aircraft designer, and self-trained pilot who, on 25 July 1909, make the first flight across the English Channel. The flight from Les Barraques, France, to Dover, England, undertaken an aircraft he designed himself – the Blériot XI – and in bad weather, earned Blériot the £1,000 prize that the London Daily Mail had offered to the first aviator to cross the Channel in either direction. His accomplishment delighted the public and shocked many in the British military and political establishment.

Blériot was born in Cambrai, France, and obtained a degree in Arts and Trades from École Centrale Paris. He invented automobile headlamps and established a very successful acetylene headlamp business, amassing a small fortune. He used the money from his business to experiment with towed gliders on the Seine River, learning much about aircraft and flight dynamics. He built a model ornithopter, which further aroused his interest in aircraft. Bleriot's earliest real aircraft design was for a glider, built in 1905 by another aircraft manufacturer, and he experimented with many biplane and monoplane configurations. His designs were modified and consistently improved, and his planes became known for their high quality and performance.

Blériot did not invent the monoplane; a Romanian lawyer turned inventor who lived in Paris, Trajan Vuia, built the first one that achieved successful flight, flying 12 m (40 ft) on Mar 18, 1906. That year, Blériot switched from a biplane to a monoplane configuration to increase the efficiency of the wing structure. Then, in 1907 at Bagatelle, France, he flew a plane he had designed himself, the Bleriot Model VII, for the first time, flying more than 500 m (1,640 ft). Although the craft itself was not considered a success, the Model VII set the pattern for much of Europe's monoplane development.

Flying in those early years of flight was risky. Aircraft engines were small, unreliable, and generally prone to overheating rapidly and most engines of this period could run for only about 20 min before they began malfunctioning. In addition, the planes themselves were unreliable, especially for longer flights. Pilots frequently stayed over land or close to the shoreline to avoid open stretches of water, allowing them to head for a roadway or field in an emergency. Less than a week before Blériot's successful flight, Hubert Lathem, another early aviator, was the victim of a failed motor on July 19, when he had to ditch his plane in the water as he tried to cross the Channel. Bleriot acknowledged the danger of early flight in his paper Above the Channel when he reported, "At first I promised my wife that I would not make the attempt." He said that she had begged him not to make the flight and afterward, he promised he would fly "no more" once he completed a race that he had already entered.

The Blériot XI made its first flight on 23 January 1909, at Issy-les-Moulineaux. The plane was first equipped with a 30-hp (22.4-kW R.E.P. engine, which drove a four-bladed metal propeller. During testing, however, Blériot replaced it with the more-reliable 25-horsepower (18.6-kW) Anzani engine and installed a Chauviere two-bladed propeller. (But this did not remove all risk – in an earlier flight, Blériot's Anzani engine had overheated.) The tail consisted of a central rudder and elevators at each end of fixed horizontal tail surfaces. Lateral movement of the aircraft was controlled by wing warping the trailing edges of the wings. The plane had a 7.8-m (25.5-ft) wingspan, was a little over 8 m (26 ft) long, and was 2.6 m (8.5 ft) high. It had an ash fuselage with supporting struts and wire ties, and the shoulder-mounted wing was also wood.

This Blériot performed admirably. Between 27 May 1909, when the Anzani engine was installed, and its historic Channel crossing, it made some remarkable flights – the best on 4 July, which lasted 50 min and 8 sec.

For the 9 July attempt, the French government authorized Blériot to have a destroyer, the Escopette, support his attempt to span the English Channel. The day before the flight, Blériot ordered the destroyer to sea. The next morning, when Blériot drove to the field in Les Barraques, France, where his Model XI was garaged, he noted the light, southwest breeze that would favor his attempt. By 4:30 am, just before takeoff, daylight arrived and the wind began to blow. He reported, in a cable to the Washington Post, that he pushed his engine to 1,200 rpm, nearly top speed, to clear telegraph wires at the crest of the cliff near the field. Then he lowered the engine speed to give the XI an airspeed of approximately 64 km/h (40 mph) and an altitude of about 76 m (250 ft). At that speed, he rapidly overtook the destroyer and became lost in the clouds, which blocked his view of all landmarks. He could not even see the ship. The sea below had grown rough. There was wind and rain. His craft did not have a compass! Afterward, he reported those moments, "I am alone. I can see nothing at all. For ten minutes, I am lost."

He continued flying straight ahead as best he could. Roughly 20 min after leaving France, he spied the green hills of Dover and the famous castle. The wind had blown him off course. He was near Margaret's Bay, west of the field where he had planned to land. He would have to push his engine to a greater distance. However, the rain that might otherwise be a problem was cooling his engine. As he approached the cliffs of Dover, gusts were stronger and airspeed slower as his "beautiful" plane fought the wind. But the Anzani was powerful enough to propel the XI over the cliff. He spotted his friend waving a French flag to confirm he had the right field. Now Blériot had to maneuver the craft to not hit any of the buildings near the field. Bleriot reported that the wind caught his plane and whirled him around two or three times. With his altitude at about 20 m (65 ft) and being driven by the wind, he immediately cut the engine and dropped to the ground! Blériot commented, "At the risk of smashing everything, I cut the ignition at 20 m. Now it was up to chance. The landing gear took it rather badly, the propeller was damaged, but my word, so what? I HAD CROSSED THE CHANNEL!" British Customs had no provision for a landing other than by ship, so Bleriot was logged in as a ship's Master and the XI as a yacht.


Flight to the future

The significance of Louis Blériot's successful 37-minute flight over the English Channel could be measured not only by his "immense acclaim" upon landing in Dover but also by the impact on political figures, military commanders, and planners. They came to the startling realization that Britain was susceptible to enemy attack by other than water. The nation had a strong navy and could face attack from the sea – not from the air. Politicians saw that Britain was not prepared for this new transportation system and its new technology. David Lloyd George, chancellor of the Exchequer, said, "Flying machines are no longer toys and dreams, they are established fact. The possibilities of this new system of locomotion are infinite. I feel, as a Britisher, rather ashamed that we are so completely out of it."

After his triumph over the angry seas of the English Channel, Blériot went on to build aircraft for the French government for use in World War I and commercial aircraft thereafter. His vision, skill, and ingenuity contributed to aeronautical science and the growing popularity of aviation as a sport. The basic layout of the standard control panel that he designed in 1908 holds true for today's modern aircraft. Bleriot remained active in the aircraft industry until his death in August 1936.

In July 1964, Australia chose Blériot's Model XI for its postage stamp commemorating the 50th anniversary of the first airmail flight in Australia. The plane was similar to that used by Maurice Guiilaux for his milestone Melbourne to Sydney flight.