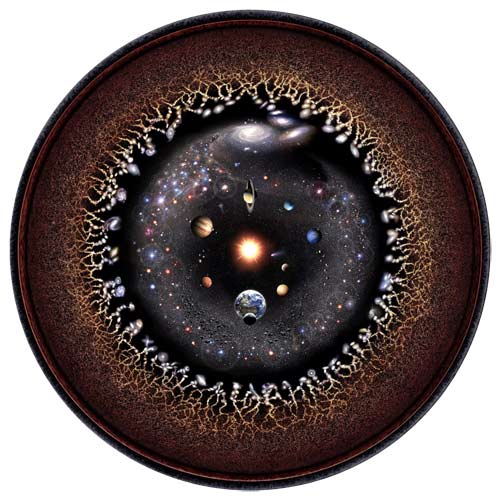 Representation of the observable universe on a logarithmic scale.

A cosmological model is a description of the universe in terms of its spacetime configuration. Assuming that matter, overall, is distributed evenly and the same in all directions, there are three basic possibilities. (1) A closed universe is positively curved like the surface of a ball and is finite in extent; such a universe grows to a certain size before collapsing again. (2) An open universe is negatively curved like a saddle and is infinite in extent. (3) A flat universe has zero curvature and is infinite in extent. The factor determining which kind of spacetime we actually live in is the average density of matter in the Universe. Depending on whether the average density is greater than, less than or equal to the so-called critical density, the cosmos is closed, open, or flat, respectively. Current observations suggest a value tantalizingly close to that needed for spacetime to be flat.

The oscillating universe theory, briefly considered and then reconsidered by Albert Einstein in 1930, claims that the universe is in the midst of an endless cycle of expansion and contraction. The galaxies are expanding but will eventually reach a point of exhaustion whereby they will begin to collapse inward to a "big crunch" before exploding in another "Big Bang." The universe we currently exist in may be the first or it may be the latest in a series of collapses and rebirths.

There are a variety of cosmological hurdles to overcome for the adherent of the oscillating universe theory: there is not sufficient mass in the universe to generate the gravitational force to bring it all back for a "big crunch", the speed at which galaxies are moving is simply too great for their direction to be reversed; and reduced levels of nuclear fuel will result in a loss of mass that will reduce the gravitational pull of galaxies and make a reversal impossible, and ultimately all nuclear fuel in every galaxy will be exhausted and the universe will grow cold and die in a "Big Freeze."

Arguing the merits of an oscillating universe pits one against an array of impressive science. The American Astronomical Society says the universe is far lighter than previously supposed and that "galaxies and their stars are unlikely to stop expanding." Princeton University states: "There's simply not enough matter to close the universe," while the Harvard-Smithsonian Center for Astrophysics says it is "95 per cent confident" there is nothing to keep the universe from continuing to balloon out forever.