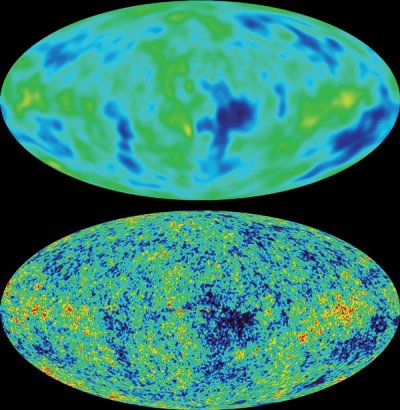 Fig 1. In 1992, the Cosmic Background Explorer (COBE) was the first instrument to detect the tiny variations in the temperature of this radiation across the sky (upper image). Data from the Wilkinson Microwave Anisotropy Probe resolve the picture in much finer detail (lower image). 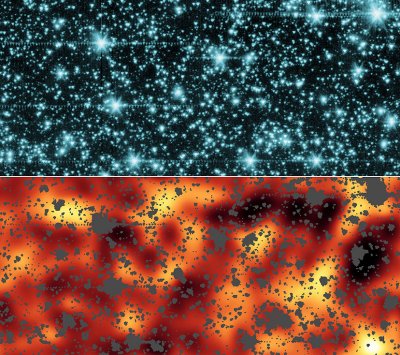 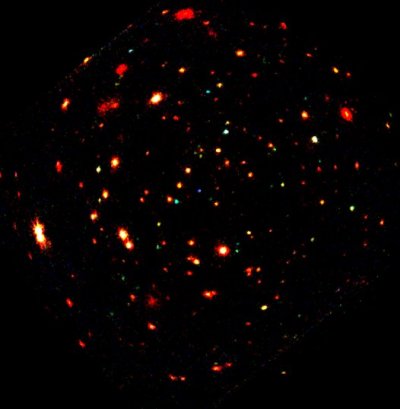 Fig 3. X-ray image of the sky taken through the Lockman hole by the XMM-Newton Observatory, resolving some of the background into many faint individual sources. The image is color-coded, with red representing relatively low energy X-rays, photons with 500 or so times the energy of visible light. Green and blue colors correspond to increasingly energetic X-rays with up to about 10,000 times visible light energies. Notably, the faint sources tend to be green and blue, showing X-ray characteristics of huge amounts of material falling into supermassive black holes in very distant galaxies. Credit: G. Hasinger (AIP) et al., XMM-Newton, ESA.

The cosmic microwave background (CMB) is diffuse electromagnetic radiation, most intense around a wavelength of 1 mm, that fills the universe. It had been predicted theoretically but was first observed in 1964 by the American telecommunications engineers Arno Penzias and Robert Wilson.

The cosmic microwave background is the strongest component of the cosmic background radiation and is believed to have originated in the decoupling era, about 300,000 years after the Big Bang, when radiation was first able to travel freely over great distances without being absorbed by ordinary matter. The temperature of the universe at that time was about 3,000 K, but the expansion of the universe has redshifted the relict radiation into the microwave region of the spectrum so that it now appears as if it has come from a blackbody with a temperature of just 2.73 K.

Sensitive measurements of the microwave background by the Cosmic Background Explorer (COBE) and other spacecraft have shown slight variations in temperature of the CMB with direction; these are taken to indicate slight fluctuations in the density of matter in the early universe, which would have been critical to the formation of the first galaxies (Fig 1).

Measurements of the CIB by the 2MASS telescope, published in 2002, confirmed earlier estimates by COBE that the CIB is two to three times brighter than expected based on extrapolations of observed galaxies. The brightness indicates that there was an incredible burst of star formation during the Universe's youth. It also supports the idea that a great deal of dark matter was present, pulling gas together shortly after the Universe's birth, and enabling the first stars and galaxies to form.

The cosmic X-ray background (CXB) is an X-ray and gamma-ray glow that comes from all parts of the sky. First revealed in the 1970s by early X-ray satellites, its origin proved something of a mystery. Beginning in 2000, however, more powerful orbiting X-ray instruments, such as the XMM-Newton Observatory, have resolved some of this enigmatic background into many faint individual sources, their X-ray characteristics pointing to huge amounts of material falling into supermassive black holes in very distant galaxies (Fig 3). These results add to the growing consensus that massive black holes hold court at the center of all large galaxies and that, from across the universe, X-rays produced as matter feeds these black holes account for the bulk of the CXB.