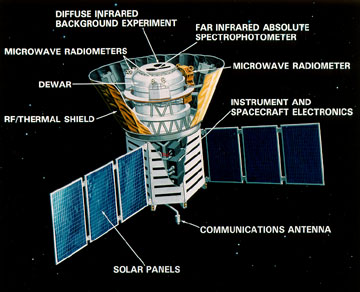 COBE (Cosmic Background Explorer) is a NASA satellite, launched in November 1989, that was designed to study the residual radiation of the Big Bang. Its historic discovery of "cosmic ripples" – tiny fluctuations in the temperature of the cosmic microwave background – was announced in 1992. COBE also mapped interstellar and interplanetary dust clouds. Originally planned for launch on the Shuttle, COBE was redesigned for launch aboard a Delta following the Challenger disaster. Its instruments include the Differential Microwave Radiometer (DMR) to check the thermal and structural uniformity of the early Universe, and the Far Infrared Absolute Spectrometer (FIRAS), and the Diffuse IR Background Experiment (DIRBE) to search for the remnant radiation emitted from the primordial galaxies as they formed. COBE’s supply of liquid helium was exhausted in September 1990, causing loss of the FIRAS instrument.