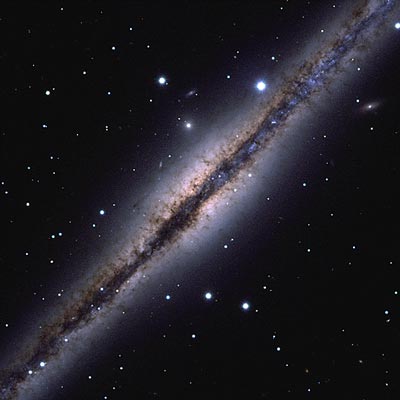 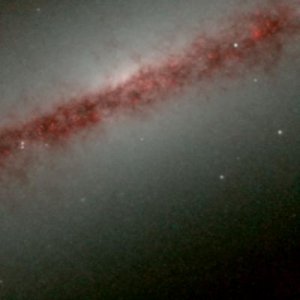 Detail of NGC 891 seen by the Hubble Space Telescope.

NGC 891 is a nearby spiral galaxy, in the constellation Andromeda, that is seen almost perfectly edge-on from our vantage point on Earth. It is bisected by a prominent dust lane. Discovered by William Herschel on October 6, 1784, NGC 891 is thought to resemble our own Milky Way Galaxy so that studies of it may provide clues to the nature of the galaxy in which we live.

A study of molecular (CO) gas motions in the inner parts of NGC 981, by Gilbert Esquerdo and John Barentine 1995, led them to suggest that the galaxy might be a barred spiral. If this is the case, its Hubble type would be SBb instead of Sb.

High-resolution images of NGC 891's dust has shown unusual filamentary patterns extending well away from the galactic disk. According to one interpretation, this dust was ejected from the disk toward the galactic halo by a series of supernova explosions. Other evidence of recent activity has come from a comparison of the X-ray and infrared properties of NGC 891 with those of normal and starburst spiral galaxies. This comparison suggests that NGC 891 is most probably a starburst galaxy in a quiescent state.

NGC 981 is visible in small to moderate size telescopes as a faint elongated smear of light. It can even been glimpsed through binoculars. The dust lane is only visible using larger apertures.